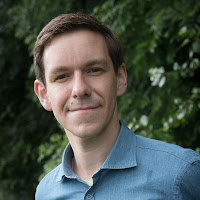 Welcome to Sam Tongue who obviously has been in isolation with a film crew given the quality of his video. Whereas with some poets you just see the shoogly top of their heids amidst the pine panelling of their kitchen ceiling, or the uneven planking of their poet sheds, Sam greets us here comfortably from his armchair, as though he is holding some literary salon I haven't been invited to.

Sam has a PhD in Religion, Literature, and Culture and lectures at the University of Glasgow. He is,  therefore, Doctor Tongue but I'm not going to call him that because the name has unsavoury associations for me, being the name of  a 1980s Texan funk band that an erstwhile friend of mine was obsessed by and whose music, along with that of the Flaming Haemorrhoids, I was forced to listen to for 48 hours whilst in a strange state of semi-coma in Beauly.

Sam has had great successes in the febrile world of Scotlit. In 2013 he held the inaugural Callan Gordon Award as part of the Scottish Book Trust New Writers Awards and he has been published in many good mags, newspapers and journals in Scotland and beyond, including  'Be The First to Like This: New Scottish Poetry' published by Vagabond Poets and  'Best British and Irish Poets' published in 2016 by Eyewear. He has had two pamphlets published : 'Hauling-Out' by Eyewear in 2016 and 'Stitch' by Tapsalteerie in 2018. His first full collection is 'Sacrifice Zones' was published earlier this year by Red Squirrel. He is currently poetry editor at the 'Glasgow Review of Books' and co-editor of 'New Writing Scotland'. He has also judged or helped judge The William Soutar Prize, The Wigtown Poetry Competition, and the Scottish Book Trust New Writers Awards.

Sam's new book 'Sacrifice Zones' is named after a term which I think first surfaced during the Cold War and is now used to describe areas of land ruined by economic or environmental decay and damage: a potent motif of modern society. Here he reads the poem 'On the Suitability of Venus Flower Baskets as Wedding Presents.' Sam Tongue is an accessible young poet who writes poems of sometimes startling lyrical beauty and this is a very fine example.

A link for his book here:

His profile and more poems on the SPL site here:

Sam sent over the poem 'Morning has Broken' for what he said was a bit of light relief but I like the gloomy stuff too. So before that,  I attach a poem I think shows a lovely lightness of touch while packing a well drilled punch, 'Contours', which appeared first in 'Compass' magazine.


The explanation is ‘signal failure’.
So we wait, glassed-in
behind the hot train window.

Outside, the farmer ignores us, face blunt
under a damp cap, the stock of his shotgun
balanced over one arm, heavy as a clock weight.

The woodpigeon flounders
in the muddy furrow’s undertow,
a weight of buckshot in its soft belly.

The field’s deep perspective: a belt of old birch
lines a steep contour and a single beech tree
stands elephantine at the peak.

This will all be ploughed in:
birch, beech, farmer, stubble,
woodpigeon, cause, effect,

the contours of your tracked body,
the words you shouted down
to me this morning when I left.
This will all be ploughed in.


Unsleeping, I hear the morning chorus start
with what could be a skylark or a chaffinch
cleaning the bedroom window with a squeegee,
squealing through last night’s rain streaks, shining
it off with its beak. You, my snoring beauty,
sleep on, regular as an idling tractor.
Morning has broken, but you’ll help haul it
out of its muddy ditch and set it right. Together,
we’ll give it a push, get it going, first sputtering
like a kettle, then running warm into the buttery day.