Backroom 47: Shug Hanlan, Ahead of his Time. 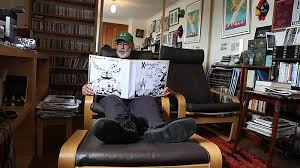 This blog has been full of one-offs and here's another one. Little did Shug Hanlan and I think, in that flat in Willowbrae Road in Edinburgh in the heady 70s, that we would go on to be writers of sorts. We were too busy at MacBets, or Clarks Bar or Mathers. Or maybe we did think of it in fact, I cannae remember.

Shug was a dustman when we met, keen on music, football and literature, too. He was one of the earliest contributors to Rebel Inc and was mentioned in the same conversations as Irvine Welsh, Alan Warner, Ali Smith and Duncan McLean. In 1997 he featured in McLean's Clocktower anthology 'Ahead of Its Time', a roistering and important work. This was followed by the publication of 'Hi Bonnybrigg' published in 2013 by Neil Wilson Publishing, a collection of stories centred round his home village. Well centred round there, the cosmos and the outer reaches of his imagination. Before all that he founded the world's first football fanzine 'Sick as a Parrot'.

In Shug's work, more often short prose than poetry, the outlandishly surreal and comic work hand in hand. Reality is warped -often, but not always, with hilarious intent- so we view the mundane again with a new, blackened eye. Gangs of homophobic bowlers. Punters with supernatural powers. Murderous pirate radio DJs. A High-jumper worried about the drag effect of a hard-on on his straddle technique. Such is the literary territory stalked fearlessly by Shug, not to caricature and ridicule, or for cheap laughs, but to do what the best writers do best, entertain while opening a sympathetic window on their fellow human beings.

Shug 's publications lately have been self produced and, like a lot of other people's patchily reviewed. My favourite review of two of his books contained the immortal line " I read them when they arrived but cant remember what happened." Kerfuffle Press has produced two books 'Xploration' and 'Ship-rex', and more lately 'The Look-Out Man', from which collection the poem at the foot of the page is taken.

Anyone looking for more poems, videos and info its on Facebook here:

A Review of the 'Look-Out Man' in Sphinx

Brady wiz hit across the heid

wae a golf club
or if it wiznae
the heid it wiz the tap of the back.


The upper half of the body, definitely

Metal woods, golfers call
them, coz the end bit's made of
metal no wood.


A metal wood, swung one
handed. The left hand there
wurnae a great deal of force in it.

It could have been onaybody.
They're aw keen golfers ah ken
it's a big hobby in that scheme.
Posted by Shug at 01:06