Poems from the Backroom 64: Ross Donlon 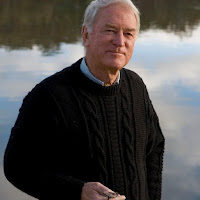 Ross Donlon joins me in the Backroom today, the second of a fantastic  Australian contingent which has already featured Jane Frank and will go on to feature Michele Seminara, Nicola Wardley and the Scotto/Oz poets, Alison Flett and Ali Whitelock.

Lost poets and lost fathers. I suppose Australia has always been a kind of fabled land for me long before I visited it and gathered proper reasons for loving it. My sister reminded me recently that my father made a great attempt to relocate the family - before it irrevocably broke up- to Wagga Wagga but my Highland mother, who only ever in her life travelled a few times to England and never beyond, wouldn’t have it. So I sometimes have the vision of the poet Shug in the alternative timeline of Australia. The magazine that I think published me most consistently in the old days apart from 'Cencrastus' was 'Poetry Australia' edited by John Millet who took a shine to my ramblings and with whom I had a long correspondence until the magazine folded. Enquiring after him more lately from the editor of another fine magazine 'The Australian Poetry Journal', I was told that he had sadly died and was sent an account of his funeral. Imagine my surprise then when, not long ago, I received a poetry book written by John Millett based on his wartime experiences in the RAAF with a warm letter enclosed by the poet himself, dated a year and a half after his funeral. I’ve never really quite got to the bottom of this story beyond being delighted that, in some universe at least, the poet John Millett is alive and thriving.

Like my father, John Millett served in World War Two and Ross Donlon’s father did too, as an American soldier fighting in New Guinea. Ross was a ‘GI’ child who never clapped eyes on his father though the latter kept sporadically in touch with his new family, never quite managing to catch a boat back to Australia. From tantalising fragments Ross wrote an moving set of poems ‘The Blue Dressing Gown’ published by Profile Poetry detailing or guessing at his father’s last years as an alcoholic in San Francisco where he died alone in 1951 when Ross was six in a dive near the docks called the Ferry Hotel.

The theme of fathers lost not in war but by war connects me to Ross but his poems in general take a scattergun to life, his and others, producing the sort of record of ‘his kind’ as Anne Sexton would say, which I think is one of the most important functions of poetry. I heard him read at Jean Atkin's Poetry Lounge in Ledbury and he was great. He was meant to be coming over to Scotland last month but it all had to be binned of course because of the virus.

Ross Donlon is a poet, born in Sydney, who now lives in Castlemaine, Victoria. He is widely published in Australia and also in Ireland. He was awarded the Varuna Dorothy Hewett Flagship Fellowship in 2010 and has won two international poetry competitions, The Wenlock Poetry Festival Competition (under the auspices of the Arvon Foundation) and the Melbourne Poets' Union International Poetry Competition.

The Blue Dressing Gown was published in 2011 by Profile Poetry.A sequence from his book, The Blue Dressing Gown (Profile Poets) was produced for Radio National's 'Poetica' in 2013. His last book was Lucidity in 2017, a collection of poems drawn from 2010-17. The 'Bread Horse' from Flying Islands is due soon, virus permitting.  He organises the 'Poetry in the Kitchen' a monthly reading in Castemaine which I hope to attend sometime!

I was with the boys in our group
at the meeting place, a peppercorn tree,
eating lunch inside the shadow.
The peppercorns’ bright, spicy scent
remains in memory
the way it stays on fingers with the stain.

Soon I would be ready for the Big School.
Boys were separated from the girls’
asphalt playground of rectangles, circles and squares.
Boys played wars up
and down a sloping paddock beyond the classrooms.
We heard the cries a continent away.

Suddenly the talk came to fathers and what they did.
As turns edged around the circle like a clock
I discovered that I could not speak.
What was it that could I not say?

The bell saved me as I was falling.
A huge part of who I thought I was
had avalanched, as if a shelf dropped
from a mountain.

I was an obedient child
but I ran home from school then to Nan,
my family skittled by a missing pin.

We sat on her bed and looked at photographs
and a face the size of a fingernail.
Bill. From the war.
She fanned out pictures like playing cards.

It was a summer’s day.
The bedroom’s lace curtains glowed in the heat.
Wind blew sweet scent from Peek Frean’s biscuit factory.
The bitumen noise of cars rushed down our street.