Poems from the Backroom 53: Andy Jackson 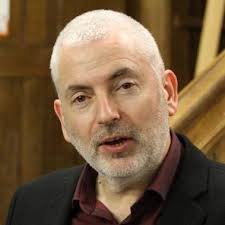 Andy Jackson was born in Salford, moved to Scotland in 1992, and works as a librarian in Dundee University. He is a fine poet but also one who has dedicated much of his energy to excellent on-going projects which are dedicated to showcasing other peoples talents, sometimes the talents of people who have been in the public eye, but more often, a bit like the old #plagueopoetry, showcasing the immense poetical talent we have lurking in the towns, villages, sculleries, cellars and woodsheds of Scotland and beyond. These projects are well worth a really good skek by anyone who cares a jot or a whit about poetry and how it connects to the political and cultural life of our country.

In his 'Otwituaries' :
https://otwituaries.blogspot.com/
Andrew produces tweet size obituaries of recently deceased figures who have left an imprint, sticky or otherwise, on the face of the land.

In 'Scotia Extremis':
https://scotiaextremis.wordpress.com/
Andy and Brian Johnstone, a fine poet who featured earlier in the series, made dynamic pairings of poets who were made to write poems that reflected linked but separate aspects of Scotland. For instance I wrote about Summerisle from the Wickerman whilst Sheenagh Pugh wrote about Balamory. It was a very cleverly conceived project and led to a very readable book which I'm sure you can still buy. In fact, here it is, from Luath Press: https://www.luath.co.uk/poetry/scotia-extremis

'Postcards from Malthusia':
https://newbootsandpantisocracies.wordpress.com/
In this, built on an older project, 'New Boots and Pantisocracies', Andy Jackson combines with the mercurial Bill Herbert to publish poems in response to the current epidemic of Coronavirus, providing, in his own words, 'a highly efficacious vaccine for distress – ideas.'

All this, combined with other books he has assembled or co-edited, like Whaleback City', a brilliant anthology of poems about Dundee, reveal a person more concerned with the propagation of poetry than his own career but he is an excellent poet in his own right.

His first collection 'The Assassination Museum' was published by Red Squirrel Press in 2010, and a second collection 'A Beginner’s Guide To Cheating' followed in 2015. A third collection of poetry entitled The Saints Are Coming will be published very soon by Blue Diode Press.  This comprises forty poems inspired by patron saints of unusual things. In 2017 he was Makar to the Federation of Writers Scotland.

Andy's Profile at the SPL and some more poems:

Boys, if I could give you some advice
it’s this; don’t wait too long to dance.
Three a.m., they’re kicking on the lights,
don’t kid yourself you never got the chance.
At every disco, theories abound –
I’m guilty too – my own research has shown
that sex is codified in sound,
and proved that Sly and the Family Stone
were not related, that Doctor Hook
was not a real doctor. But watch my lips –
the gnostic gospel of the dance – O holy book!
– beatifies the winding of the hips
and castigates mere flexing of the knees,
for they are not the vessel for the soul.
Okay, so Orbison could cure disease,
his tears the unctuous oil of rock and roll,
but it was in the dances of communion –
the Time Warp, the Slosh, the Locomotion –
I found the rhythmic blessings of the union,
fell, sated by the raptures of devotion.
I came to that corroboree of perfection
they call the hokey-cokey. It was there
I found my pagan purpose, my connection,
embodied by a credo I could share;
You put your whole self in; your whole self out.
In the end, maybe that’s what it’s really all about.
Posted by Shug at 00:09