Poems from the Backroom 74: Bob Beagrie 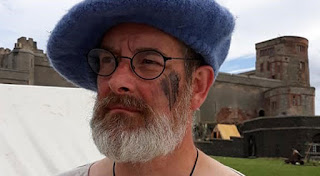 And so let Friday and Saturday be the days of the English. Ochone ochone. But we are not displaying narrow nationalism here, let us hearken back to the days of the early Stuart Kings, when every nationality was welcome to Scotland without a passport. Except the English come to think of it, so that's not a very good example.

Our beards have grown long in this process but we've actually already, away back, featured a very fine English poet,  Jean Atkin, though I’ve always believed she had some kind of joint citizenship. Over the next two days we’re featuring two excellent poets who will also be welcome as honorary Scots when we finally depart the unnatural construct of our political union - and poets will always be welcome residents because poetry knows no boundaries and poets should be a perpetual multinational force, like UN peacekeepers, circulating round the world dampening conflict, showing there's another way.

The first of these is Bob Beagrie who made a tremendous impression on me when I saw him in action in the Scottish Poetry Library last year? Was it really last year? He was reciting from ‘Civil Insolences’ a series of poems based on the Battle of Guisborough of 1643 in the Civil War and I don’t know whether it was his backing track or all the drink I’d had at lunchtime but it seemed at some very vivid points like we actually all were in the 17th century. I love historical poems and I love the power to communicate them and give yet another level to what might already be supposedly a weel kent story. And also to give history not just relevance but credit for being in very many senses part of the present.  Particularly working class history, or the stories of ordinary people. In this respect I would recommend to you the extraordinary 'Leasungspell' written partly in Old English about Oswin, an uncelebrated monk, charged with a mission of no real consequence, adrift in the strange wilderness of the Dark Ages and we're with him every step of the way.

Bob Beagrie lives in Middlesbrough and is a senior lecturer in creative writing at Teesside University. He has published numerous collections of poetry and several pamphlets, most recently 'Civil Insolencies' from Smokestack in 2019, 'Remnants' written with Jane Burn  from Knives, Forks & Spoons Press in 2019,  'Leasungspell'  from Smokestack in 2016 and 'This Game of Strangers' – written with Jane Burn  and published by Wyrd Harvest Press in 2017. He has collaborated with musicians, he has also worked closely with visual artists on public artworks and with theatre company Three Over Eden and and is a founder member of the experimental poetry and music collective Project Lono. His work has been translated into many languages.

“Where am I hurried! What sanguine place

Is this I breathe in, garnished with disgrace?”

John Quarles – An Elegy upon that Never
to be Forgotten Charls the First, 1649


The broken men yield, after the blizzard's rage,

to the scandal of disorder, tainted by the taste
of this new age and grub about for tales to give
account for their phantasmagoria from ordinary
house-holder, groom, apprentice, tinker, gent,
undisciplined idler rendered citizen-soldier,
hystericals, histrionics, mama's boys, bastards,
brewers, patricides – although there is so much
they'll not meddle with, including themselves,
having been shunted out of grammar’s backdoor
into the vulgar dirt of unpronouncables, the fylth-
riddled freedom of formlessness, succoured on
an homeopathy of killing. Their dark nativities
bubble with ramblings to take back control
in defence of the state as Cartemandua, Frigg
Britannia, safe-guarded, wearing the familiar
mask of mother, sweetheart, favourite whore
– each of them a springhead of fresh anxieties,
labour pains for a post-term Kingdom Come.


Self Portrait With Body Works
(after Gunther von Hagens)