Poems from the Backroom 67: Michael Dempster 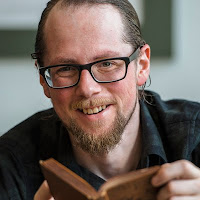 Danielle Corkery, in a great rant against the Anglo-Irish authors of his day including Synge and Shaw, declared "when we let go of our language we laid the seeds of our own mental destruction."
I was watching a program the other day about Gaels who have lost their language, recalling their youth, and not one talked about it without tears in their eyes. Without a doubt, knowledge and use of your native language- whatever it is- provides both comfort and a vital social foothold in life, a fact that centuries of conquerors have grasped very well. In Dumfries and Galloway, a land, as you can clearly see from the map, Gaelic in history and tradition, you only need to read the fuss created by the idea of dual road signing to realise that language is more than a form of communication, it's a potential cultural and political battleground.

Dr Michael Dempster, in the Backroom today, is a Scots speaker and neuro-scientist who is convinced that speaking our natural language, the language that many of us were brought up with, improves mental well being as well as providing by its links with the past, a cohesive framework of memory that improves mental health and binds folk together socially and culturally.

Like Chris Kelso who's coming up in a day or two, Michael works across a huge spread of art forms,
including opera, comics, folk and contemporary song, poetry and stage and screenplays. He has recently been working with JOOT theatre bringing the poetry of The Makars to the stage.  Michael is the director of The Scots Language Centre and is the current Scots Scriever at the National Library of Scotland. His job is to promote first speaking of scots across the board.

Here he takes Lord Byron by the lug and returns him to his Scottish roots:

Lines Inscribit Upon a Cup Formt fae a Skull

Better tae haud the spairklin grape,
Than nurse the earth-wurm's slimy bruid;
An circle in the goblet's shape
The drink o Gods, than reptiles' fuid.

Quaff while thou kin—anither race,
When thou an thine lik me are speed,
Micht rescue thee fae earth's embrace,
An rhyme an revel wi the deid.

Further works can be found on his YouTube channel: