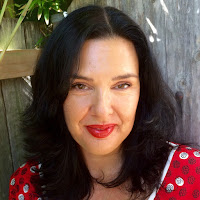 Michele Seminara is a relatively new Australian poet but has come a long way in a short time. Rummellin through her biography and some sources about her, I found three things to immediately recommend her to the discerning readership of the #plague.

First, in her capacity as the editor of a very fine Australian poetry magazine, she published that really odd poem of mine about the nutjob lighthouse keeper in Killitrangan who made a daily count of the moths who were attracted to his lamp. Secondly she has written a poem about drinking, which I reprint in full below. Drinking during the day, or any other time, is an essential but unfashionable pursuit for a poet nowadays. It is time this position was reversed. What did the great ones say?

“That’s what I do: I make coffee and occasionally succumb to suicidal nihilism. But you shouldn’t worry — poetry is still first. Cigarettes and alcohol follow." That was Anne Sexton.

The third and more important thing is that Michele has taken often bitter and wounding life experience and turned it into highly accessible and powerful poetry as you can see from the video, and from the second poem printed below, 'Run Rabbit'.

Michele Seminara is a poet, editor and yoga teacher. After studying Literature at the University of Sydney, she travelled extensively in India, returning from her travels to settle down in Sydney and raise a family of three children. She is Co-Managing Editor of 'Verity La' . 'Engraft' her first major collection, was published by Island Press in 2016 and two chapbooks 'Scar to Scar' and 'HUSH' followed. Her second full-length collection, 'Suburban Fantasy', is forthcoming from UWA Publishing in 2020.

She has also performed her poetry at and helped to organise the Blue Stocking Poetry Jam and the Women’s International Poetry Festival in Sydney.

Here she reads 'On reading Bishop' from her collection 'Engraft'.

More about Michele and information about her books here:

Two poems and a review in 'Cordite' Magazine:

An Interview for 'Tincture' Magazine:


The coiled snake
of my father’s anger
sleeps at the base of his spine.

It snores through play
but rises unpredictably
to transgression.

Triggered, it shoots up and out
his customarily kind mouth.

We flee in well-versed vectors —

Alas, plump and placid,
I am the slow one…

I retreat to this land whenever I need healing —
to ingest its molecules into my lungs
its light-waves into my pupils,
black-holed mainlines into the suffering brain.

Supplicant’s fingers raking
rough rock in a prayer of taking and giving;
barbecue smoke entering my throat
swallowing breath in a taste of oneness.

Today I stumble the bush in gumboots
sunglasses shielding swollen eyes
clumsy after the rancid wine
pulled in desperation from the back of the cupboard.

One part of me sinking into grief
the other rising inexplicably above —
gazing in awe at the ball of the sun
until it’s all that I can see.
Posted by Shug at 16:28