Poems from the Backroom 65: Alison Flett 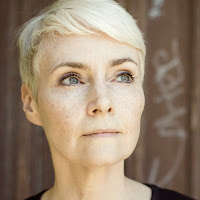 Its strange how poets disappear even when they don't. I suppose the feverish atmosphere of the poetry scene where your gaze often doesn't stretch further than your own navel means that your attention shifts to whatever mags your reading, whatever you're submitting to at the time, whoever you're listening to on social media blethering on about the scene and you forget poets who were household names. It's your fault, no theirs, because they've been there all the time, writing books, winning competitions, even appearing in the same mag as you.

Alison Flett is one-such, an excellent poet who's never been away, except a bit from Scotland geographically: She's lived in South Australia for the last ten years. Alison was a poet I remember fine from some cutting edge and important publications, like the magazine 'Rebel Inc' and 'Dreamstate', that manifesto of younger writers edited by Donny O Rourke and published by Polygon, which contained so many poets who were going to go on and carve out fine careers. Alison was associated with the generation of writers who coalesced around Rebel Inc and Duncan McLean's iconic 'Clocktower Press' and appeared, like Shug Hanlan and others, in the latter's fine anthology 'Ahead of its Time'. Rebel Inc also published her collection 'Writing like a Bastard' in 1993. Her collection 'Whit Lassyz Ur Inty' published by Thirsty Books in 2004 was shortlisted for the Saltire First Book of the Year Award and sits upstairs in my poetry collection. Written in a brawny, beat vernacular it gives a brilliant, punchy, hilarious voice to the modern Scot, his or her worries, concerns everyday and global. In the poem 'Patriotic Pish', for example, she imagines three members of Parliament at the urinal, their different coloured urine forming a Union Jack that goes on to poison the water supply.  Alison was anthologised also in 'Modern Scottish Women Poets' from Canongate and '100 Favourite Scottish Poems' by Luath Press..

Since moving to Australia she has been published in various anthologies and journals including 'Australian Love Poems', 'Australian Poetry Journal Anthology' 2018 and 2019, 'Cordite', 'Rabbit', 'Southerly', 'Stylus Lit', 'Tincture', 'Westerly', 'Irises: The University of Canberra International Poetry Prize 2017' and 'Buying Online': Newcastle Poetry Prize 2018. She was shortlisted for the Whitmore Press Manuscript Award in 2014 and the Adelaide Festival Unpublished Manuscript Award in 2019. She is an arts reviewer for 'InDaily', poetry editor for 'Transnational Literature' and publisher at Little Windows Press.

Here she reads 'Five Things I loved about Coronavirus', workshopped and written during lockdown. Below is transcribed Vessel 1 from her Chapbook 'Vessel' published by Garron Press in 2016 and  a taste of her earlier work, 'Harbour'from 'Whit Lassyz Ur Inty'.

Links to other poems here:

No-one else has seen inside this child.

She is small. The sky does not yet come down
around her. It is still contained
in a blue strip at the top of the page.

Right now she’s setting her place for breakfast​
but has stopped half-way between
the crockery cupboard and the table.

The sun has just risen above the roof of her building
so that she can see the reflection of her windows
in the windows of the building opposite.

She doesn’t know it’s a reflection of her own windows.
It seems a thing of itself, a thing that appears
and disappears with the light. In her hands

a cup is holding itself together around a cup’s worth
of space. In her head something is pulling the reins
of the galloping horses in the kitchenette clock.

She has just asked her mother a question.
When you get older do you remember more?
And her mother has answered yes, I suppose you do.

The child knows this is the wrong answer.
She knows her mother means you have more things
to remember, there’s more living filling your head

She doesn’t know how to ask that question
so instead she has stopped to remember
this, forever:

her hands cupped around a cup
she is carrying to a table, a cup
inside which reflected light bounces.

She watches her hands move apart.
She watches the cup drop and break
the pieces thrown outwards making new

angles of light, forming the beginning of
an understanding of how we go beyond what
we are, an awareness of being and not being

a first meme which will repost versions of itself
again and again in her brain until she comes to see
the cup isn’t what matters.