Poems from the Backroom 51: Ross Wilson 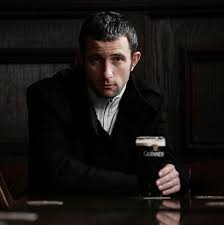 Two things about Ross Wilson: one is that he's unashamed in this poetry and cakes era to be photographed with a good old Pint of Plain and the second thing is he's a working class poet whose gritty poetry reflects his background and the difficulties, contradictions and ironies of working class life today. He's also a thinking poet, aware of and interested in not just the craft but its practitioners and its traditions. He's also written about boxing. Although I've been hit by a few poets, Ross is the only one I know that's a real boxer and he seems gentle as a lamb. Ross was a schoolboy champion and is still an enthusiast and his latest book, 'Line Drawing' has a chunk of poems dedicated to the noble art. Boxing is not a hugely important part of his life now but it remains an extremely good metaphor.

Ross Wilson was raised in Kelty, a former mining village in West Fife. A national schoolboy boxing champion and internationalist, he has worked in warehouses, factories, hotels, kitchens and various other places, now full time as an auxilliary nurse. He has been a recipient of a Hawthornden International Fellowship and his poems and stories have appeared in many magazines and anthologies. His first pamphlet collection, The Heavy Bag, was published in 2011 by Calder Wood Press. His first full collection, Line Drawing, was published by Smokestack Books in 2018.

Here he is reading ‘Shine’ from a soon to be published collection about his daughter,  'Letters To Rosie'. 'Shine' was originally published in The Dark Horse magazine, and you can also read the text below.

The year you took centre stage in our lives
was the best summer anyone could remember.
The sun blazed a spotlight over your pram
as we wheeled you through Roukenglen.

You’d peer up at those big yins
who’d reach for you with arms
like branches that stretched over their heads
so shadow-bars alternated with blinding rays.

New sensations blurred in a brain where
a million neural connections sparked per second
under a wee hat you loved to rip off
as if its tight grip restricted your growth.

Data streamed in; Da-da flowed out
in a gaze fixed on me, in days when memory
was short and quickly eclipsed
like the sun you won’t remember.

I catch what I can with my pen
so that when you read this poem
the light that graced you as a bairn
will shine in you again.


A poem from 'Heavy Bag'


James came and turned
away from a right cross
in pain and walked across
the street for a bottle.

Craig put on two stone of muscle,
boxed a man naturally heavier than him
and discovered the truth in:
there’s nowhere lonelier than the ring.

Stewart had talent but lacked will,
won a few fights, missed nights
training, got a girl pregnant and
no one knows where he went.

Lesley was a tom-boy lesbo bitch
according to a few folk before
she learned to fight back and
flattened Fat Mary on her back.

Alan wasn’t very good – he got better,
lost a few before he won,
never won much but
got there.

All six were in the same year.

James is on the dole now.
Craig is a bouncer.
No one knows where Stewart is.
Graham is in Kirkford Cemetary.
Lesley is at the university.

And Alan runs the local ABC
three nights a week.

https://www.scotsman.com/lifestyle/book-review-line-drawing-ross-wilson-108010
Posted by Shug at 16:22