Poems from the Backroom 70: Tom Pow 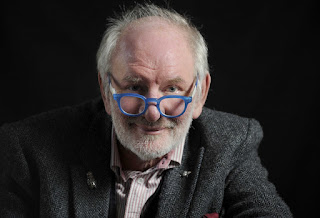 Well how amazing. Post number seventy, and we arrive on the day Tom Pow is seventy years old himself. How did that happen? Happy Birthday, Tom.

Tom is Father of the  House in Dumfries and Galloway poetry. I remember when I was in my early twenties and had not yet experienced the cheesecake epiphany that was to turn me into a poet, attending some kind of radical meeting in the Cairndale that was going to make no impact on anything except the profits of the Oak Bar. In swept this bloke with a long coat, addressed the meeting, and swept out again. 'That's Tom Pow the Dumfries poet' somebody said, gravely. What Tom said at the meeting didn't make any sense to me, not because it was complicated but because I honestly don't think it made any sense, but the notion of being identified as a town's poet stuck, though in order to achieve this myself  I have had to move to a succession of smaller and smaller places.

Tom is a Dumfries poet but also a Scottish poet and a poet of the world. He has the curiosity and imagination that a poet should have, sweeping through swathes of landscape and time while remaining very much himself, a product of his own history, in whatever real or imagined place he is. He has a huge range yet remains very human in scale, and his poetry talks, as it all should, of the things that concern folk, nature, loss and love. He has travelled widely and turned these travels into poetry, and books of poetry. He is one of Scotland's most lyrical poets, like his contemporary and friend Stuart Conn, and a beautiful hypnotic reader. I listened to both of them in action reading from their Mariscat pamphlets in Dumfries and it would have brought tears to a glass eye.

Tom Pow was born in Edinburgh and studied Medieval History at the University of St Andrews, then taught for a number of years in Edinburgh, London and Madrid before settling in Dumfries, where he became an English teacher at Dumfries Academy, that hub of literary excellence. He went on to become Head of Creative and Cultural Studies at the University of Glasgow’s Crichton Campus, Dumfries, and was Honorary Senior Research Fellow there. He was a lecturer also at Lancaster University on its Distance Learning MA in Creative Writing. In 1992 he was holder of the Scottish Canadian Fellowship, based in the University of Alberta in Edmonton. In 2000 he became Scotland’s first Virtual Writer in Residence for the Scottish Library Association. He was the first Writer in Residence at the Edinburgh International Book Festival, Poet in Residence at StAnza in 2005, and a Robert Louis Stevenson fellow in 2015.


Primarily a poet, he is the author of twelve collections of poetry, including 'In the Becoming: New and Selected Poems' in 2009 and 'The Well of Love' published by Mariscat in 2016.  Four collections won Scottish Arts Council Book Awards. He has also written three radio plays and a number of books for children, including 'Who is the World For?'  illustrated by Robert Ingpen, which won the Scottish Arts Council Children’s Book of the Year Award in 2001. Most recently, he has edited 'Barefoot – The Collected Poems of Alastair Reid' published by Galileo in 2018 and a sequence, 'IS', with the fabulous Roncadora Press in 2019.  He is presently the Creative Director of A Year of Conversation 2019.

Tom is a poet of great substance, but also a very warm person, and a person I'm proud and pleased to know. Tom should realise he has, or his poetry has, left an indelible mark on my everyday life. I am unable to pass a patch of bluebells in the wood without thinking they are everywhere like desire and at moments of anger and frustration will turn my eyes to the sky, roaring to the invisible nothingness  'And this? Our quiddity?' Thus Tom Pow has entered the lexicon of my life. Long may it continue.


In his final years, illness attended
the artist. His friends brought him flowers

and, in modest works, when free from pain,
he gave them his fullest attention. Each

became a study in concentration
and in the memory of paint: testament

to the moment. One instinctive still life
of that period is of a fat bundle

of asparagus, each stalk fleshily
overfed, ready for the kitchen.

The purchaser paid over the odds,
so Manet, in recompense, sent him

a small oil painting of a single stalk.
‘There was one missing from your bunch.’

Its body, pearly-grey as the belly
of a fish, lies inert on the marble top.

But its purplish tip curves gently up
in the way that a fish, brought to land,

will raise its head and gawp for life
though there is nothing that can save it.