Poems from the Backroom 49: Douglas Lipton 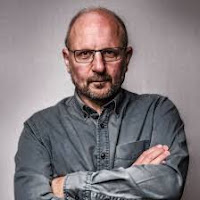 I remember reading 'the Flora and Fauna of an Independent Scotland' by Douglas Lipton twenty odd years ago and wishing so dearly that I'd written it. My envy is hardly an objective measurement of a poet's worth but in this case it fits. Douglas is a fantastic, passionate and committed poet who has not received the consistent recognition that he deserves.

He's not a hidden gem because he's been published in a series of excellent magazines and publications for years and has been very influential - Richard Price, whose poem 'Hedge Sparrows' was chosen to represent Great Britain as part of Poetry 2012: The Written World, a Cultural Olympiad quoted its influences as "Aesop's fables, by Apollinaire, and Douglas Lipton"- but I think its true to say that he suffers from what the great Makar Willie Neill used to call "Galloway Syndrome" that is the state of being geographically out of sight and consequently often out of mind where the great myopic eye of Scotlit is concerned.

Looking through his publication credits you see repeated appearances in every great iconic magazine of Scotland over the last 40 years including 'Lines Review', 'West Coast Magazine', 'Cencrastus' , 'New Writing Scotland'. In terms of publishing he has however, with the exception of 'The Stone Sleeping Bag' published by Mariscat in 1993 gone for collections outwith the mainstream, often produced in pamphlet form locally. He has a long standing connection with a Rumanian literary magazine called 'Contemporary Literary Horizon' edited in Romania by Daniel Dragomirescu. Its aim is to generate inter-cultural dialogue and understanding.

The copper butterfly punctures her chest,
shreds and incarnadines her medic vest.
– These vests and kitbags are deadly weapons.
She doesn’t know she’s been hit. “My back,” she yells.
“My back.” She falls. The butterfly has spread
its wings inside her, spread her bone, vessels,
tissue – its mettle – on others like her:
medics come to tease wire, treat gore, pull back
through a gap someone alone there, felled
by a teargas canister. – Not enough
– that mace – so, told to shoot to kill, they kill
whom next they’ll flip from angel to demon
with some film they’ll clip, those who rip up
her wedding dress to make a bridal shroud.