Poems from the Backroom 58 Jane Frank 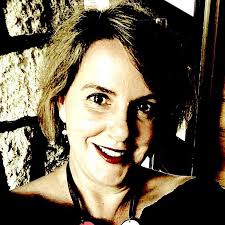 Straight out of autumn in Brisbane comes Jane Frank, the first of several Australians soon to grace the pages of the Pestilence. I got to know Jane initially when she lived in Dumfries in the 1990s and used to attend Dumfries Writers and, on a regular basis, the more informal writing workshops of the Tam and the Royal Oak. Is it my imagination but did Dumfries have a Left Bank then? Jane worked at a variety of jobs through those years, for TC Farries the book seller, the library, the Arts Association and the Edinburgh Festival Fringe.

When she returned to Oz, Jane eventually started a PhD about the Book Town Movement and the  importance of books in the digital age (her book Regenerating Regional Culture: A Study of the International Book Town Movement was published in late 2017 by Palgrave Macmillan.) She is now Director of the Centre of Creative Industries at Griffith University. She is also, though, much more pertinently to this blog, a fantastic poet.

Her poems have appeared most recently in 'Hecate', 'The Blue Nib', 'Not Very Quiet', 'StylusLit', 'Antipodes', 'Verity La', 'Cicerone Journal', 'Meniscus', 'Grieve' (Hunter Writers Centre 2019) and the 'Heroines' anthology (Neo Perennial Press 2019). Her manuscript' Dancing with Charcoal Feet' was highly recommended in the 2016 Arts Queensland Thomas Shapcott Poetry Prize and she was joint winner of the Queensland Poetry Festival Philip Bacon Ekphrasis Award in 2019. Her second collection is due out very soon from Calanthe Press. Jane Frank and I also have a collaboration on Scottish/Australian emigration which is due out from Flarestack.

Jane's father was a watercolour artist and at one time she painted herself, so much of her poetry, whatever it describes— and it ranges from the political and ecological to the very personal— draws on that, and is infused by rich layers of words. She has an artist's eye— in fact many of her poems are inspired by or interpretations of paintings— and her poetry is vivid with imagery. You often feel yourself in there, immersed in lush words, but never losing sight of the path of the poem, straight to the solar plexus, or the heart.


Here are some links.

More Poems to be found here:


the outlook: much as it has always been
the Point Vernon rocks stretched to the horizon
the Scarness jetty on seabird stilts
its barnacled shins bare in an ebbing tide
the ocean’s broderie anglaise edge
the dogs chasing sticks
the curving cotton trees stippled with yellow flowers
the sand wet from a wolf moon tide
a mushroom rainstorm out at sea —
onyx on aqua —
but here: still golden

a bone broken by two people: the holder
of the larger portion wins

no wishbones drying on the window ledge
in this house

as I dried up, I’d rehearse the ritual:
fingers curled tightly around a brittle furcula

dreams of flight: the goose in the company
of gods but why a perfect bone fork?

strengthen the thoracic skeleton to withstand
the rigours of flight

the energy of that mutual tug, dry hands
essential

the prophetic oracular power in bones: the
return of a migratory sun, the spring, green days

when you say those things to me …

every action has an equal, opposite reaction

a fork occurs when the clavicles are fused
together

the bone stores energy generated by contraction
of the wing muscles

should I stand still and resist? or reel myself back?
stop. breathe. remember the wishes

fun fact: in the seventeenth century, a wishbone
was called a merrythought

wasn’t I the strut between your shoulders once?
the one that helped you fly?

the breaking of thin fragile bone makes a
distinctive ‘snap’

I still need to be the one who makes the wish