Poems from the Backroom 59: Jim McGonigal 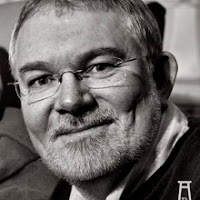 It's great to host Jim today as he is one of that gallant and gowsterous band of poets from Dumfries. In fact I think he attended my old school, Dumfries Academy, which was obviously a breeding ground for poets in recent times, both Alison Fell and Ron Butlin attending, as well as yon faither of Dumfries and Galloway Literature Tom Pow, who taught there for many a year. There is a plaque outside the school but the only literary name on it is that of  JM Barrie, who attended the old Academy, the Georgian school which was demolished so that the new school could be built about 120 years ago. When I taught, I periodically took my classes down to the basement to see a little stretch of the cobbled road that led to the old school, the only remains extant, and we used to imagine wee Jim walking along there with his packed lunch set for another day's humiliation at the hands of his friend and much taller, brainier, rival James McMillan. Hopefully another plaque will be hoisted bearing the names of more modern literati as well as the brilliant artist Chrissie Fergusson whose paintings of Dumfries from the 1920s and 1930s make it resemble some Mediterranean dream.

Jim McGonigal left Dumfries and was educated in his senior phase in Glasgow. His parents were both catholic, teachers from working class backgrounds. He himself taught English in secondary schools and retired as Professor of English in Education in the University of Glasgow. He is very modest about his poetry, saying in his website that it has been published mainly "in small-press editions or ‘fugitive’ journals, often difficult to track down." He has had four collections published by that excellent little press Mariscat, however, the last being the 'Camphill Wren' and two collections from the up and coming Red Squirrel Press, the latest of which 'In Good Time' is out right now, so buy them from the link below. His poetry has also been published in a squad of excellent magazines over the last thirty years. He also won the Michael Marks Awards for Poetry Pamphlets with 'Cloud Pibroch' (Mariscat Press), in 2010, no mean feat.

He is well known too for his award winning biography of Edwin Morgan, Jim building on a long association with the poet to write a comprehensive and compelling narrative of the poet's life. 'Beyond the Last Dragon: A Life of Edwin Morgan' (2010 hardback, then 2012 in paperback) was based on the poet’s extensive collection papers, letters and manuscripts which he had donated to the Department of Special Collections in Glasgow University Library.

Here Jim is pondering our legacy in the planet, through trees, firstly reading the final part of 'Dendachronic Recall' and then 'I Wonder Which School'.

How could we have held clouds in both hands
and wrung them out like dishcloths? Our children
woke with snowflakes on their brows.

Can I return to the main point of this illness,
the immediate wound, after some attempts
to stop its tongue of blood?

Starlight must have blessed the skin
and broken it—or voices just outside the tent
have sung us wide awake.