Poems from the Backroom 75: Tom Dewey 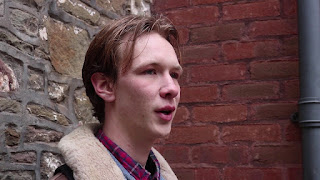 I'm reminded of Baudelaire's words often, and in fact the first video poem I saw of today's guest, Tom Dewey, was entitled 'Bottles'. In it he leans against a city wall drinking beer. "Before I open my mouth you hear this bag clunk" he says. "I am a hostage to hedonism, a doorway to nowhere." All that stuff really attracts me, of course, because I love that wee strange liminal feeling you get after a (small) drink and because I know many a poem has been born there, in that half light. Tom also inhabits the grey area between poetry and spoken word, between image and the page, and he occupies it confidently. His poems therefore live in various ways at once, poem, performance, technical feat,  image. Having come to the poetry poem as a performance piece in a rather cynical vein these pieces, and others I've come across in the Plague, have impressed me hugely.

Tom Dewey is a 24 year old poet and playwright from Bristol. Tom began writing in 2015 and became the youngest ever regional spoken word champion. He’s had his work featured on BBC iPlayer, and BBC Radio. performed to a sold-out Roundhouse and delivered a TEDx Talk, a media platform that broadcasts talks online for free distribution as long as the idea is interesting enough. Tom's talk was on mental health. Tom works closely with the Bristol Old Vic and was selected to close the weekend-long celebrations of their 250th birthday. He is a passionate advocate for creativity in his native city.

Here he reads 'Kites' , "Flattering the future with footprints".


you grip the spoon and stir the kuzhambu

raising the heat, honing the flavour to a swelling specificity that baptises
meat and perfumes the kitchen you’re afraid you will die in, but won’t
you wonder why you cook for an empty house, wonder why you’re haunted
by hungry mouths who feast on your offerings but when it comes time
never speak of their leaving just leave like alcohol burning away from the wine you share with your food
the two of you perish five bottles a week
the lady in the shop asked if you knew it was two-for-one and your stock was reduced to famine

now there is music in my hands


the rhythm of my lonely has a little more kick, a little more swing to the
tune of my torture —— all around me, nameless agonies give up the ghost
and whistle along, forgetting their oath of immortality

we dance all night, bodies burn into the shape of something the shape of closure
we fall to the ground —— our drunkenness melts into wisdom now the party is over
my bedroom is rife with sleeping ghosts,
i am to be the sole recipient of sunrise
i wipe my eyes, turn to my instrument and translate dawn into pure epiphany