Poems from the Backroom 72: Tsosheletso Chidi 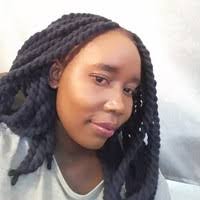 It's been a great series thus far folks, and its been brilliant to be joined by such outstanding talents from Scotland and beyond. I think, given that we've been producing a glorious river of poetry during lockdown, continuous daily videos from March 17th, that we think about ending the #plagueopoetry at the three month mark and celebrate by having a socially distanced vat of Guinness in a neighbour's garden. Still plenty of talent to come though and over the next two days we've got two outstanding women poets.

The first of these, the second of our three South African writers, is Tsosheletso Chidi.  She is a  25- year old poet and novelist, born in GaMphahlele Hweleshaneng. Her debut novel 'The Baby Is Born' was published in 2015. In 2016 Ekurhuleni Metropolitan Municipality published her short story 'They Died In My Name' in their annual anthology 'Stories From Ekurhuleni'. In 2019 she dropped out of the University of South Africa to pursue a MA in Creative Writing at Rhodes University. She is interested in the early childhood development and education, and she plans to build two ECD centres in the near future; one in Hweleshaneng GaMphahlele and other in Tembisa. She mainly writes in her mother tongue of Sepedi. Recently, she worked with Avbob Poetry Project and in 2019 was a recipient of the Andrew Mellon Foundation Scholarship for writers.

Like the first South African poet, Zodwa Mtirara, and indeed the Native American poet tomorrow, Kimberly Blaeser,  Tsosheletso is not afraid to combine the traditional harmonies and folk rhythms of her people with a potent, individual and political message that is not oblique at all.


Thanks go again to Stuart Paterson, whose work at Rhodes University in 2019 initiated important links between Scottish and South African writers and enabled the contacts here with Tsosheletso and, previously, Zodwa Mtirara.

(This is a isiZulu harmony:
Respect president Ramaphosa
Sit down and obey the law)