Songs from the Backroom 97: Nicola Black 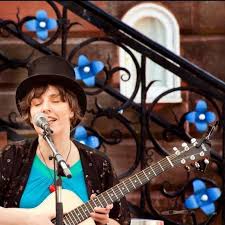 We're well due a musical interlude, so here's another. Except its not the kind of musical interlude that you sometimes get when you chat to your mates and go for another pint. I've always found it dead annoying when folk talk through the music as if its piped from the ether to provide the background. Nicola Black deserves your attention, she's a singer, song writer and poet with a special affection for putting Scots poetry to music. And she's also one of these underrated jewels of Dumfries and Galloway.

Nicola inhabits that interface between poetry and music, not one supporting the other necessarily, but the merge in between, each enhancing the other.

Nicola Black has worked with many writers on projects, and has just finished writing fourteen songs for the 'CatStrand Singers', a community choir,  based on writings, history and stories of the Galloway Glens area, a land rich in mystery, history and legend. She also recorded 'Moonstruck', a critically acclaimed album of her own musical settings of Hugh MacDiarmid's early Scots poems. Its well worth buying, folks.

The song she's singing today,  'Selkies', started life as a poem, then was put to music. It reflects the feeling of being between worlds, belonging and longing. "It felt appropriate", she says,  "in these uncertain times we all find ourselves in." The Selkie is, of course, a creature torn between the land and the sea, between myth and reality, between legend and the commonplace.

Nicola made this recording with her  husband and long time musical collaborator Blackie, who, for this, swopped his usual bass for an evocative drum.

Here are links to Nicola's songs:

An EP of her compositions with Sister Fox, ‘Not quite Perfect’, is here:

She also made an appearance on this CD by Stuart A Paterson:


​​When the sea call becomes too strong.
And your heart cries out for her green- eyed depths;
Don’t look back.

Why worry,
Do what you do,
Let nature take her course.
Don’t falter,
Be who you are,
That’s anyone you want to be.

The selkies would know you,
Trapped on the shore,
Where you grip the sharp contours of
Who you were before love held you down.

In the reek o the early morning sunlicht
The young ane's blue veined sheer flesh
Has nae leuk o this warl.
The auld ane has a smeukit smile.

He slidders his scroggie haun doon deep
Intae the saggy pooch o his jaicket,
Pouin away at a white box
That will no cam oot the way it went in.

'What hae ye there?' asks the wraith,
A wheen curious, but still oan his gaird.
Ye canny trust them a.
'I ken whit yer needin Son, luik at this noo’.

‘You young folk are awfy fir these hings’,
He says, wi a glint in his wattery een,
'Thirty fir a o them, fair?'
The young ane gaithers himsel, sighs, an walks.