Poems from the Backroom 81: Harry Owen 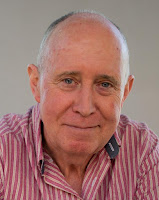 What use is a poem? As injustice rolls on like a juggernaut I ask that question often but better folk than me have already answered. Poetry is not just the argument with yourself, as Yeats said, but also a way to try and change the world, "which is never the same", said Dylan Thomas,  "once a good poem has been added to it. A good poem helps to change the shape of the universe." Maybe it's a language that if you repeat often enough will be picked up by those around, until it becomes a way of thinking, then acting. Let's hope so.


I have written many poems about the Palestinian situation which seems to me the epitome of unrestrained and unrestrainable injustice. Today's guest partly came to my attention because of the poem 'Children of Israel' which I reprint in full below and which demonstrates how controlled rage, sorrow and empathy can be masterfully woven together from a set of bare and awful facts.

Harry Owen, an English poet now living in South Africa, is a poet of conscience and a stalwart and outspoken advocate for the rights of people, animals and the natural world. Widely published in literary journals and anthologies, he is the author of eight full collections of poetry, the three most recent being 'Small Stones for Bromley' from Lapwing Publications; 'The Cull: new and resurrected poems' from The Poets Printery, East London; and 'All Weathers'  from theInkSword, Grahamstown last year.  He has compiled and edited three anthologies: 'I Write Who I Am': an anthology of Upstart poetry; 'For Rhino in a Shrinking World': an international anthology and 'Coming Home': poems of the Grahamstown diaspora. 'For Rhino in a Shrinking World' came about as a response to horrific attacks on the Rhino population at a nearby reserve called Kariega and elicited a magnificent international response to raise awareness for the plight of these great animals.
Harry hosts the popular monthly open floor event called 'Reddits Poetry' in Grahamstown, in South Africa’s Eastern Cape, where he lives.
Here he is reading 'Say Something':

Information about and samples from 'For Rhino in a Shrinking World'

I stroll down Donkin Street with Billy the dog
and am drenched with fragrances
curling like mists, like alms, from the trees,
cascades of perfume—bauhinia, jasmine, wisteria—
and the knowledge that this, my peaceful fortune, is
as pure and undeserved as mountain waterfalls.
God or no god, these are blessings.

Blessings. Mohammed Ramiz Bakr, Age 11,
where are yours? Dina Omar Azeez,
5 years: yours?

Carefree schoolgirls jog or saunter through
the Botanical Gardens, laughing, hooting,
calling out, smiling a polite good afternoon sir
to me as now I head once more toward
the university lawns, a simple
Gaza memorial under gentlest spring
skies: lines of white sticks, of children’s names.

Above my head an oriole pours out a balm.

There is rain in the air, there are tears.

And there are four hundred names here, a drop in the ocean.

Billy the dog. Jasmine. Waterfalls. An oriole. Names.
These are blessings. We bestow them as best we can.


What we should have

A world run by rhinos, or dogs, or elephants –
a world based on heart and head, not intellect alone,
a world without guns.

‘Swords into ploughshares’ is the injunction,
but I’d like to see ‘guns into cameras’:
shoot all you want, but take only the image, never the life

and have the decency, the modesty,
the essential humanity to learn of peace
from rhinos, loyalty from dogs, intelligence
from elephants – and the meaning of love
from all of them.
Posted by Shug at 16:19