Poems from the Backroom 106: Colin McGuire 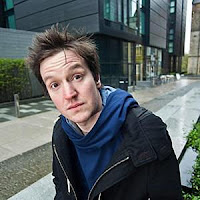 Colin McGuire has been around for years-I know this for a fact- but doesn’t seem ever to age any, obviously a pact he’s made with dark forces away back. In return for eternal youth McGuire stalks the dark and dodgiest corridors of the human condition employing, as the blurb on his latest book says, 'dark humour and twisted imagery'. Who can resist such attributes? We all lurk in corners but maybe not as starkly or elegantly as McGuire:

'You sit alone, but not lonely and say to air
with the wisdom of nothing: It’s as if my life happened
to someone else. And you take a biscuit and taste,
as all moments, the crumbs of what remains.'

Colin McGuire is a poet and performer from Glasgow, who now lives in Edinburgh. His poetry on the page is surreal and beautiful but he is known best for his dynamic, engaging live performances.  He won the Shore Poets Quiet Slam in 2014, and the Luminate Slam 2015 and he got to the semi-final in the BBC Fringe Slam in 2013 and 2018. He won the Out:spoken award for the 'film poetry' category and best poetry overall in London in 2018. In 2020, he was an Ignite Fellow Awardee, awarded by the Scottish Book Trust. He is currently working on a book as part of this award. He studies and teaches mindfulness and runs Mindfulness and Expressive Writing Workshops in schools, charities, libraries and community groups.

His most recent collection is 'Enhanced fool disclosure' (Speculative Books, 2018).

Here he reads 'A Small Thing':

Five poems from 'The Punch Magazine':

in the teensiest, helium-pitched
mouse-like voices?

The universe is so small
we point telescopes to look at it.

I have been searching most of the night
for a grain of salt lost amongst the carpet.

Some of the people I care about most
are dust particles on eyelashes.

The stars are insoluble rock salts
I pretend to pick with a pair of tweezers.

Age is being struck by a bolt of lightning
that slows you gradually; the envy of youth
is never having to rush, who speed past drunk
on their own engine, before being struck
by lightning in turn.

Roll on Gran, roll on Sister, roll on Mum, until
the tale end of the night, until the batteries run out,
until the bones creak like a stiff door,
until your voice slows to an aphasic blur, roll on love.

For now you pocket a few biscuits, and turn back
to the living room and the television, the programme
on in a few minutes. Your slippers like a voyager’s
boots carry you on, to that firm chair.

You sit alone, but not lonely and say to air
with the wisdom of nothing: It’s as if my life happened
to someone else. And you take a biscuit and taste,
as all moments, the crumbs of what remains.

Eighty years. The accumulation, to bring me here,
to bring me here, to this conclusion, to sit alone
and watch the television, the screen’s white illumination
a kind of joke, and I am all that’s left of the tree now.

Love stretches as long as a life, before it snaps.
But God have I worked for it, Christ.