Poems from the Backroom 104: Rab Wilson 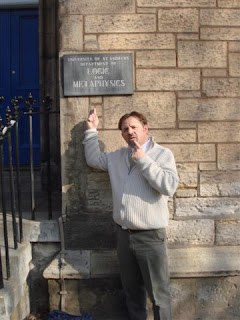 It is a total pleasure to have Rab in the Backroom today. He's virtually the last person I had a pint with before the Coronacatastrophe, in the Croon in Sanquhar, a great pub with Burnsian connections. Rab, an ex-collier engineer, is a working class poet from Rabbie's heartland in Ayrshire, and like every Scots poet, and certainly every poet writing in Scots, has had to address or embrace the legacy of his namesake. Rab was ‘Robert Burns Writing Fellow for Dumfries and Galloway Region, has worked with the artist Calvin Colvin on a book of responses to Burns and was Scriever in Residence for the National Trust for Scotland based at the Robert Burns Birthplace Museum in Ayr. A bit of a Burns scholar, therefore, he's aware of the resonances, his grip on the popular imagination, but also the essential elusiveness of the man and the poet.

(From 'Whare Burns has Wrote in Rhymin Blether')

Rab Wilson is his own man, a natural and powerful writer and reader in Scots and his themes range across a wheen of interests, historical, political and contemporary, all of which he approaches with skill but also a well grounded sense of humour. Unlike many of his contemporaries too, he is a proud formalist too, a sonneteer.

He has been published in many magazines and journals and performed in all the important festivals including StAnza and Wigtown. He has had several books out with the great Luath Press including 'Life Sentence' and 'Accent o the Mind', 'A Map for the Blind' and 'Zero Hours'. Most recently he collaborated with eminent Scots astronomer John C. Brown in the cross cultural proect 'Oor Big Braw Cosmos', also from Luath Press, a great glorious meld of science, image and poetry. His stalwart work in promoting Scots has stretched from the Holyrood Parliament to regular columns in 'The National'. As an editor, he created the wonderful and seminal anthology 'Chuckies fir the Cairn', an anthology of contemporary Scots writing in Dumfries and Galloway.

Here as his wally dug looks on, is a brilliant reading of  'Radio Radio', 'Somerfield Check Out Number 2', and 'The Greater Sea'.

'Waiting for the Poetry Bus', a great wee film about Rab and his poetry:

Rab's profile and more poems on the SPL site:


Harrassed, the lassie frowned,
an shouted oan the Supervisor,
‘Ah weesh they’d mark them mair cleerly,
hou much is this Chardonnay, Wilma?
Is this the yin that’s oan oaffir?’
The wummin ahint me stared,
then the big fellah appeared;
ruggedly handsome,
wi his bunches o flooers,
justifiably embarrassed.
‘If that’s aa ye’ve got,’ she said,
‘jist taik thaim tae the Basket Coonter.’
Then added, cheekily,
‘Onywey, ye’re too late!
Valentine’s Day wis yesterday!’
The big fellah wis oan form though,
his face lit up, an pu’in a flooer,
haun’t it tae her;
‘Hen, when ye stey wi me,
every day’s Valentine’s Day!’
an, claspin his tulips,
he cantily mairched oot the door.
Clutchin her prize,
she paused,
briefly,
an gazed,
wistfully,
eftir him.

(From 'Chuckies fir the Cairn')

Fir tartan kythes the colours o the warld.
(From 'The Scores')

Scroll back from the cosmos,
To inner space.
The mind's micro-structure
Nanoscientists mind-mapping
The brain's hundred billion neurons,
Its thousand trillion connections,
Processing 0.1 quadrillion thoughts per second.
Vastly more sophisticated
Than any computer.
What causes that leap
Across the synapse?
The spark between Creator and Man?
That lets the poet contemplate the rose –
And move the human heart.