Poems from the Backroom 82: Lesley Benzie 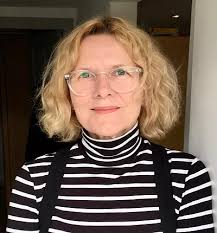 Poetic rebirths are great to see. Recently in the launch of the Poets Republic pamphlet series ‘Bearings’ I witnessed and was happy to help in the first poetry collection Joy Hendry had put together for many years. Joy Hendry, the editor of Chapman, played a huge role in Scotlit in general and the advancement of women poets in particular. Poetry is nine tenths perseverance and given male hegemony over the scene- arguably fading a bit now- and the other roles society habitually expects them to balance, women poets have for years faced problems finding routes for their own self expression and professional recompense for their craft. It would have been very easy under such circumstances to give up or seek other channels. Our guest in the Backroom today, Lesley Benzie, from Kirriemuir,  had the other difficulties, unfashionable at the time, of writing in Doric and writing about working class life.

Trail blazers by definition are the ones who who get the most stoor in their faces, but as the African proverb goes, smooth seas do not make a sailor and Lesley has persevered. Just as well, because she's a great poet.

Lesley Benzie is a poet of serious reputation and stature, whose new book 'Fessen/Reared' from Seahorse Publications, is her first in twenty years. In 1998, Tom Leonard described her and the amazing Sandie Craigie as “poets whose work I myself have very much liked on the page and in performance. They’re also people with an unselfish regard for encouraging the work of others.” Lesley published in a variety of important literary magazines including, 'West Coast Magazine', 'Pushing Out The Boat' and 'Cutting Teeth' and in 2000 her first collection of poetry, 'SEWN UP' was published by Wisdom Teeth. She was also involved, again with the late Sandie Craigie in the fantastically named tour, 'Two Weegies, One Quine, an Edinbury Whoor and a Sassenach'. Soon after this, a promising possibility of working and writing for film came up but domestic circumstances changed and for many years she has been busy making a living and bringing up a family as a single mother. Lesley was featured by Magi Gibson in Poets republic 7 in her assessment of  important underrated female voices. Hopefully the publication of 'Fessen/Reared' a volume of Doric and English poems will re-establish this fine,  powerful and restless woman’s voice.

Lesley is an NHS worker and here she is reading 'In the Name of the Virus' which is also transcribed below:

A Link to her new book here:

In the Name of the Virus

I go for my allotted daily run
occasionally breaking Government rules
by remaining outside for longer than an hour,
gazing at fields luminous with rapeseed
and hedgerows thick with gorse flowers
as yellow as the buttercups
I used to hold beneath each
of my children’s chins, telling them,
you are the sunrise in my heart

and when it sets and nighttime fears arise
I’d swear I’d walk upon its burning surface
to keep them safe from harm.

With that in mind we are now separated
and surviving in social isolation,

while hypnotic flag-waving and weekly
hand-clapping for NHS workers
covers the UK Government dipping the purse
of the institution those workers serve and
the sound of back slapping billionaires
from both here and across the pond,

where our leader takes a leaf out of his book
of unrepentant fictions
in which the president always surpasses himself
touting as an accomplishment, ranking
among the top ten
virus death rates in the world.

While I go for my allotted daily run
occasionally breaking Government rules
by remaining outside for longer than an hour,
gazing at fields luminous with rapeseed
and hedgerows thick with gorse flowers
as yellow as the buttercups
I used to hold beneath each
of my children’s chins telling them,
you are the sunrise in my heart

that is heavy with missing them.

Havin nothing else
but neighbourly relations,
she wis caught
unawares
fan he said he had something for her.
Then she wisna sure
if he wanted ti gie her it at a,
cause, as he placed it in her hand
he pulled it back
and fore
then pinned her to the wa
aneeth the stairs, ahind the lobby door.
His grin frothed whispers
she didna understand
till he came
ti the point
in her hand
She pulled aha
her sma grasp
on reality,
retreatin
intae the childhood fold,
She closed the door
and washed,
secretly.