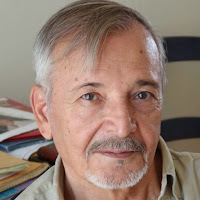 When we started the blog, I had a notion I might ask Stratis Haviaras to participate, because though he was in his mid 80s, he was a very contemporary writer, open to modern platforms and technology, too. We had been emailing for a while, as he was working on some translations of poems from 'Not Actually Being in Dumfries'. Unfortunately he died, after a short illness in March and an imposing figure in Greek and European literature is lost.

Stratis Haviaras was a most witty and perceptive man who hosted me in Athens in 2017 during my ‘residency’ at the Harvard Summer School in Napflio and was kind enough to take me to his home village of Nea Kios where he was correctly treated like a great hero. When he treated me to dinner in Nea Kios we ate by the water watching the lights of the Palamidi or old Venetian Fortress of Napflio, a few miles distant across the bay. Stratis told me matter of factly that when he was nine,  he and his grandmother walked the five miles from the village to Napflio every morning with a freshly baked loaf for his father, who had been imprisoned there by the Nazis. One morning they arrived and were told he had been shot. His mother had already been sent to a Concentration Camp in Germany and their house demolished.

Well aware of the cruelties humans were capable of, Stratis was nonetheless international in outlook, and warm and urbane by nature.He knew William Faulkner, Tennessee Williams, Arthur Miller and Marilyn Monroe.  He was a major literary figure in Greece, and in the US as a poet and novelist, translator of Cavafy and Heaney, and founder of the Harvard Review. He is best known for his novels 'When the Tree Sings' shortlisted for the Natiοnal Book Award and 'The Heroic Age' both written in English in the USA and based on the period of Nazi occupation of Greece, but he also  published several collections of poetry in English and one in Greek. Most of these books were published in the USA as he had moved there in 1967 after his poetry book ‘The Stilt Walker’ highly critical of the right wing government, was confiscated by the police. He returned home forty years later in 2008, to teach creative writing at the European Centre for the Translation of Literature of which he was President He also served as Vice President of the Greek Authors Society.

Below, a poem of Stratis' is read by the Greek poet and translator Haris Psarras. Harris Psarras was born in Athens and has published five books of poetry in Greek. Translations of his poems have been published in journals and anthologies in the U.K., the U.S., France, Germany, Romania, and Slovenia. Haris was Richard Fellingham Lecturer and Fellow in Law at St Catharine’s College, Cambridge. He now lectures in law at Southampton Law School. His most recent book of poetry, 'Gloria in Excelsis', was published in 2017.

Obituary in the Harvard Review:

No one knows the depth of solitude, the dizzy ache in the head,
the nausea in the stomach,
when you can’t tell if it’s the sky
or the well into which you must fall, from which you must rise. No one,
and it doesn’t matter
as long as those who lovingly banished you never launch a search operation.No one knows why you
write on the sky three words in an ancient tongue, “Touch-me-not”,
in translation, then erase the “not” and add “here”, then erase here and there, anything that might have been said accidentally, i.e. “me”. For no one knows that the farther you are banished the closer to home you get. No one, no one, knows but the dark,
in the farthest reaches of which you must shine alone, invisibly.

Whoever has sown pebbles
Will harvest boulders
Will turn the millstone
Will say
All rivers are foreign
Flowing home
Away from the dead and dying
Will see
A boy straining his eyes
From the smoke of burning clothes
Posting tallies on a eucalyptus
Adding my name and yours.

Midnight moon, Mnemosyne
Lunar folk with a strain of blood
Mnemosyne hematite and lonely
Stone closing an arch
In order to open it
Key of a dome
Key left in the lock
Eye blossoming inward
And already inhabited
Self-sustained
attend me!
A breath of basil reaches me
Someone must have stepped all
Over my garden- Who’s there?


Two tracks of dust, one of grass in between, going nowhere, no recent footprint or mark of wooden wheel- An old olive tree has moved into the middle of the road, blocking it.

Is it refraction? What startled the leaves sending them to flight? Leaving the tree they lift it higher, increasing its glow. The road below seems to pour in a single well.

I am standing at this end of the road reporting, i your other sight, if I leave this spot, no other will report to you. But it’s hard; there is more light here than I can use, and many more objects refracting, distracting me