Poems from the Backroom 89: Derek Ross 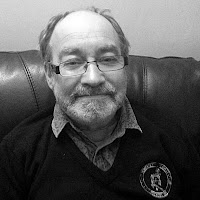 Great beard, and a voice from the very south west of Scotland, the 'Cleyhole', the bit that sticks out and you can see Ireland from. Ancient Galloway, lochs, currachs, gallowglasses, anti-catholic fairies, sea wolves, Arthurian romances, you name it. Its about as far from the centres of poetry power as you can get without falling into Beaufort's Dyke, and naebody wants to do that. The eternal contrast in Galloway is between the pull of its past and the economic unrealities of its present, a contrast that has led to a hundred thousand exiles. More. I'm going to break from #plagueopoems protocol here and print one of Derek's poems here, as it sums up this never-ending zeitgeist.

Derek Ross left one bit of Dumfries and Galloway for another and this might explain why he's relatively unknown outside it. Other hidden gems abide in there somewhere, all of them excellent Scots language poets, John Manson, Josie Neill in her 85th year, Davy Douglas. Derek's Scots is rich and addresses not just landscape but issues that concern us all. As a living language it addresses things that matter to the living.

Derek Ross is a from Stranraer but has lived in Dumfries for many years working as a microbiologist at D&G Royal Infirmary. His work has appeared in many magazines and anthologies. His poems in Scots have been featured by The Scots Language Centre, The Scottish Poetry Library, Scots podcasts, The Stanza Poetry Map of Scotland and the Channel 4 program 'Haud Yer Tongue'. He featured in the seminal and brilliant book of Dumfries and Galloway Scots language verse 'Chuckies fir the Cairn.' He is also a keen photographer and has collaborated with the Gaelic poet Angus McMillan, another underrated Dumfries poet,  to produce exhibitions combining poetry and photography. In 2019 he was chosen by the Scottish Poetry Library as the Scots language editor of the 'Best Scottish Poets 2019'. Since Covid began, Derek has established a brilliant blog containing poetry and photographs. It is linked below.

Here he reads 'The Windae':

A Podcast from Derek:

Two poems inspired by his own photographs:


If ye held up yer haun,
Aa the colours o the watergaw Wid dance aroon yer fingers,
An the waarmth o the Sun Wid singe the langer
O a boyhood efternin.
We’d watch the dust churnin
In the licht that lanced through The broken stain-gless windae,
An staun on the very spot Whar the rays split the stane O the age-weathered flair.
The broken kirk wis oors,
Jist fir a wee while, we’d savour Every shiver o the place.
We’d feel it then, richt enough, Yon feelin o no bein alane,
O sumthin burnin beyon oorsels.
Or, maybe, it wis jist kenin
We wir sumwhar we shouldnae be, An yon spark we felt within us
Wis jist the ghost o a candle flame, Flickerin in the derk, refusin
Tae gan oot withoot a ficht.


If words have ghosts,
they are wandering these fields,
whispering of an absent town
and lives that could last no longer.
If names have hearts,
Polmaddy’s has been broken
by the bitterest cut of all.
It lost its reason to be.
If stones have souls,
then let these ones rest in peace.
They had their time, let them settle
into the earth of their story.

(From Stanza's Poetry Map of Scotland)

(From Chukkies Fir the Cairn  from Luath Press)