Poets from the Backroom 79 : Gerry Loose 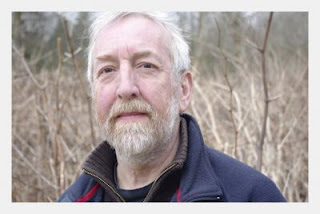 I’m fascinated by stones and the messages they have or don’t have for us. In spurious vein for my next book I’ve translated Pictish Symbol stones into text speak but a far more serious project is involved in Gerry Loose’s new book 'The Great Book of the Woods', published by Corbelstone Press just a few weeks ago. Gerry Loose’s interpretations or translations or transliterations of the ancient Ogham script found on stones in Scotland and Ireland are evocative, lyrical and powerful. They are the legacy we wished to have, thought we had with Ossian, maybe do have. I know I'm a historian by training but history waves a wand for the imagination.


Ogham is a language that is also a codex for a pastoral society and a high caste of poets. It involves linear scratches, often on the edges of stones. The name itself might derive from 'sword cut'. It looks like a code and might well have been designed as such to deceive the Romans, the Christians or whoever. It dates from as early perhaps as the 4th century and exists in over 100 varieties. Excitingly, untranslated Ogham stones in Scotland might point to the vestigial traces of Pictish: the elusive ghost language of our earliest inhabitants. Below, Gerry reads two of his transliterations from Ogham and links to buy his fascinating book also appear below the video.

Gerry Loose lives on the Isle of Bute and works primarily with subjects from the natural world. His work is found inscribed and created in Parks, Botanic Gardens and in natural landscapes as well as in galleries, hospitals and on the page. Among his publications are 'Printed on Water, New and Selected Poems' from Shearsman Books and 'That person himself' and 'Oakwoods Almanac' from the same publisher. His awards include a Robert Louis Stevenson Fellowship, a Creative Scotland Award, Kone Foundation Award and a Hermann Kesten Fellowship.

His work has been translated into many European and Asian languages and he regularly reads at international poetry festivals.

In his Oghan inscriptions, and in some of his other work, Gerry Loose's poetry has a shifting dreamlike quality and walks that liminal division between the seen and unseen, between the human and the natural world, each succeeding image seeming more and more like parts of a story you once knew and should remember again. A marvellous poet.

Here he reads 'Plague', which is copied below, and two Ogham transcriptions:

Link to buy his Latest book:

Church of the 3 Brethren Lochgoilhead

son: to leave
friend: to stroll among trees
work: to ride horses
killing: to be swift
father: to shelter the hunted

Scoonie, Fife
no name for        them
they grow deep within
tree proud bush proud
urgent     they ’re allies
though     they groan
shrivel         in the hunt
still bigger than a horse

beauty’s a boast
& kinship with saplings

with a glow of anger
& warriors’ gear