Poems from the Backroom 84: Hannah Lavery 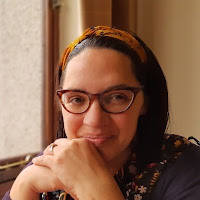 I'm glad I have the chance to post Hannah Lavery's poems today, not just because she is a poet of outstanding quality but because much of her work has focused on the problems facing BAME people in Scotland and beyond, problems highlighted by recent events such as coronavirus, and the murder of George Floyd, but which have always been endemic. I’m also typing here having just read a column in the Sunday Herald which is prodding forward the lame old line that we’re no that bad wi the racism here in Scotland. It’s a thing you hear a lot, that and the errant fucking nonsense that somehow Scotland was a colonial victim of the British Empire rather than a card carrying full blooded member with loyalty points. The conceits we have about our history are amazing and we can’t move on as a country until we address them, Gippsland massacre, the Ku Klux Klan and all.

Hannah Lavery has addressed these issues in ‘Drift’ her autobiographical play featured in the Theatre of Scotland’s season 2019 and Scotland’s Black History Month in 2018 and 2019 where she traces her lost father and his history and in many other pieces such as 'The Lament for Sheku Bayoh', commissioned by the Royal Lyceum Theatre, which was performed as a work in progress as part of the Edinburgh International Festival 2019.

Hannah Lavery was born in Edinburgh and now lives in Dunbar. She is a versatile writer full of effervescent talent, writing for the stage and writing for the page. Her first pamphlet of short fiction, Rocket Girls, was published by Postbox Press in Oct 2018 and her poetry pamphlet, 'Finding Seaglass: Poems from The Drift' was recently published by Stewed Rhubarb Press. She has been published in a wheen of different magazines and journals.

She has featured in many outstanding spoken word events and festivals and has received many accolades including being named in The List Magazine’s 'Scottish Theatre Hot List' for 2019; being named as one on 'BBC Writers’ Room Scottish Voices of 2020'; being chosen by Roseanne Watt as one of the poets featured in 'Best Scottish Poems 2019'; being selected in May of this year as one Owen Sheers’ ten writers "who will shape our future"  for the International Literature Showcase, a project from the National Writing Centre and the British Council.

Here she reads, wonderfully, ‘The Specials’ a poem of lyrical pride, love and strength, written as a reaction to racist name calling aimed at her small son. It is copied below, as is ‘Scotland, You're no Mine', the poem selected for 'Best Scottish poems of 2019'.

An interview in 'Books from Scotland':

An interview about 'Drift' in the Herald:

It’s written on your face and whilst I can still read you let me take
it for you, take it out and leave it on the step. Here we will be home.
We will open the windows and scream it for the neighbours to keep
or- the rooks!
Aye, let them caw it out.
It’s staining your boots, son, and whilst I still can, let me scrub them
clean, soak it up, screw it up, rip it up, leave it out on the front step for
the foxes. We will be home here.
We will dance to The Specials in our sock feet, in the half light,
leave our dirty boots fallen by the back door. It’s written on your face
and whilst I can still read it. Let me whisper our stories so they will
build to myths and legends
for you to emerge from -whole, strong, known. And let’s curse
through the letterbox before sticking it shut with masking tape and
let’s grow strong son, dancing to
The Specials- in sock feet.In our own half light.

Scotland, you’re no mine

Scotland, you’re no mine
(you were no his)
and I don’t want you.

So go ahead, say I don’t belong,
wi your sepia-tinged cross eye sweeping
over all that swept-away, blood-stained, sweat-
stained sugar for your tablet.

Ya macaroon. Ya rotten,
gobby, greedy, thieving bastard you,
sitting atop a that shite and broken bones, weeping,
Poor me.

Fuck you! I will dance jigs on your flags
blue n white; blue, white n red.
It doesne matter but, ya wee chancer!

Fuck! For making us complicit,
handing us whip and chains, an officer’s coat,
a civil-service pen, a Queen to love.

And lay me out, I love you
with your mountain thyme and all your coorie in.
And you can say, I dinnae belong to you—go on

—but I am limpet stuck on you.
So fuck you for no seeing one of your own.
I will, here. I will spill, here,

my blood and your secrets,
bleed into you, root and earth,
and you, forever, pagan, will, in the spill

and the seep, see all you really are.
So fuck you, my sweet forgetful Caledonia.
With love, fuck you.
Posted by Shug at 16:11