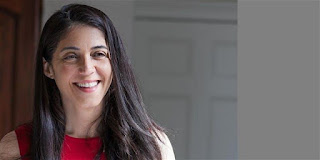 I have made no secret of my belief that poets should be in charge of everything with the possible exception of public houses. Our guest today, Marjorie Lofti Gill, is a poet and the chairperson of the Wigtown Festival Board, and she epitomises the internationalism and creative spirit of  Scotland's National Book Town, Wigtown, and the Wigtown Book Festival.


Wigtown Book Town has been a very good thing. It has transformed a severely depressed Scottish country town into a thriving community linked by books and by an annual festival in which I have, over the years, been much involved. The bloke who I spoke to once in the Galloway Arms who said “this used to be a dump and now it’s a dump with a Book Festival” shows that seismic changes don’t always work for everyone but Wigtown is an international arts venue which has attracted folk to live and set up business from all over the world. This sometimes has its disadvantages: last year when I was trying to find a Scot to read a poem one had to be imported specially from Whithorn. Art speaks best about coming and goings, however, belonging and temporariness, and the deserted ports and villages of the Machars seems a good place to discuss these matters.

Marjorie Lofti Gill, writes beautifully about these themes and is qualified to do so, having been born in New Orleans, spent her childhood in Tehran during the Iranian Revolution, then lived in San Diego, Washington DC and New York before moving to London in 1999 and Edinburgh in 2005. Her most recent collection 'Refuge' published by Tapsalteerie in 2018 addresses the position of the refugee with wistful and lyrical power. 'Ask how I can have forgotten Farsi/and the sound of her voice bidding me, night/ after night, to sleep, to let the day go.' Her poetry is about identity, lost, splintered, transplanted.

Marjorie Lotfi Gill’s poems have won competitions, been published widely in journals and anthologies and been performed on BBC Radio 4. She was commissioned to write 'Pilgrim', a sequence about migration between Iran and the US, for the St Magnus Festival; and 'Bridge', a companion sequence about a woman’s migration within Europe, for the University of Edinburgh.

Marjorie is one of the first recipients of the Scottish Book Trust’s Ignite Fellowship, a fund that supports substantial on-going projects.. She has also been Writer in Residence at Jupiter Artland, Spring Fling and the Wigtown Book Festival.

Marjorie founded The Belonging Project, exploring the refugee experience, and is a founder and director of Open Book, a charity reading in community settings across Scotland.


Here she reads 'Aibe Nadare' from her nook 'Refuge':


Many othyer links, poems and information on Marjorie's Website here:

Her grandfather always said
that everything she’d need
was beneath the grey of its shell;
the signposts of winter would come
from its height, the strength
of its spine, how long it resisted
before nodding its head to wind.
When she left, she took nothing
but the seeds, their rattle in the tiny
tin better than money; no one else
would know the shade of soil
for planting, want flocks of birds
for friends. Now, she sleeps with them
under her pillow where they grow
into her dreams, stakes to lean against
on each crossing, and wakes
picking at yellow petals
tangled in her hair.

He cannot take his mother
in the suitcase, the smell of khorest
in the air, her spice box too tall
to fit. Nor will it close when he folds
her sajadah into its cornered edges.
He cannot bring the way she rose
and blew out the candles at supper’s end,
rolled the oilcloth off the carpet
to mark the laying out of beds,
the beginning of night. He knows
the sound of the slap of her sandals
across the kitchen tiles will fade.
He tosses the framed photographs
into the case, though not one shows
her eyes; instead, she covers her mouth
with her hand as taught, looks away.
He considers strapping the samovar
to his back like a child’s bag; a lifetime
measured by pouring tea from its belly.
Finally, he takes the tulip tea glass
from her bedside table, winds her chador
around its body, leaves the gold rim
peeking out like a mouth that might
tell him where to go, what is coming next.


On seeing Iran in the news, I want to say

my grandmother was called Nasrin,
that she died two years ago in Tabriz
and I couldn’t go to say goodbye,
that she knew nothing of power,
nuclear or otherwise. I want to say
that the fires for Chahar Shanbeh Suri
were built by the hands of our neighbours;
as children we were taught to jump
and not be caught by the flame. I want to say
my cousin Elnaz, the one born after I left,
has a son and two degrees in chemistry,
and trouble getting a job. I want to say
that the night we swam towards the moon
hanging over the horizon of Caspian Sea,
we found ourselves kneeling on a sandbar
we couldn’t see, like a last gift. I want to say
I’m the wrong person to ask.