Poems from the Backroom 87: Duncan McLean 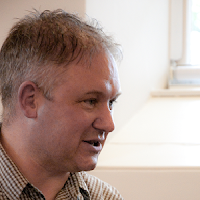 Duncan McLean is more a novelist and story writer than a poet but his impact on poetry has been - and continues to be- huge so it is a great honour to welcome him to the Backroom today. Duncan’s book ‘Bucket o Tongues’ was always a favourite book of mine, and has never aged. His was a voice in a huge crowd of precocious and brilliant talents, writers like Gordon Legge, Irvine Welsh, Janice Galloway, Laura Bird and Alan Warner and editors like Peter Kravitz and Kevin Williamson, but somehow his mix of gritty human contemporary stories set in a small town coastal Scotland made a particulate impact on me. He followed this up with 'Blackden', a novel charting a coming of age in a rural community, then the amazing 'Bunker Man' the novel that makes school jannies come out in a cold sweat in the wee sma hours.

One of the greatest things about Duncan is not just his talent - which is eclectic to the extreme ranging from short prose to highly acclaimed  novels via travelogues, stand up, street theatre, play-writing, music, an award winning wine off license business and much more -.but his great energy for promoting others. We’ve already featured Shug Hanlan, the late Brent Hodgson and Alison Flett (Kermack) who were featured in 'Ahead of its Time', one the books from the great Clocktower Press imprint which published ten pamphlets including in 1992 extracts of what would later become 'Trainspotting'. Duncan McLean has lived in Orkney since 1992 and in 2015 launched Abersee Press to encourage a new wave of northern writers. Abersee has published, among others, Christine DeLuca, Harry Giles and Amy Liptrot. The idea of having a creative power house or generator in the so called peripheries of Scotland is a great one and Dumfries and Galloway could likewise profit from it.

Here he is reading the fantastic, funny and cautionary tale 'The Big Man that Dropped Dead' from 'Bucket of Tongues' and from 'Dark Isle', 'At the Fatal Accident Enquiry'.

Interview with Duncan in Dundee University Review of the Arts:

The Big Man that Dropped Dead


I had this pal that knew about poetry, he was in the mental asylum. He could speak poetry really good, in fact he couldn't speak anything else. He'd see it up there and he'd just pull it down and speak it. On and on. He dropped dead though. I was standing there and he fell down in front of me. Aye, he was a big man, but he just dropped dead. So there you go, eh, poetry...


My cisterns are totally fucked, their insides are ro9tten with rust. But will the town pay to fix or repair them? Will they buckies!
I was leaning by the door the other day when this old guy came out, looked a bit stunned. Whats up old timer, I said to him.
Jesus Fuckeroo, he replied.
I looked him up and down. As bad as that, eh?
I think I’m pishing blood, he said, and his voice was shaky.
Do you want a seat, I asked him.
No, he said, I just had one. And when I looked down, after, the water was red with blood.
This is where I clicked: there was no blood involved, it was rust from the cistern, stirred up in the flush and staining the pan….those fucking decrepit cisterns up to their tricks again! I could hardly keep the smile off my face.
Has anyone kicked your kidneys lately, I asked the old boy.
He looked at me, closed his eyes for a second like he was trying to think, then, No, he said, Not that I can recall.
How about your guts, any punches to the guts theday?
No, he said, Not at all that I’ve noticed.
I glanced around to check no-one was near, then whispered in the hairs of his lug, How about your chugs, old man? Has anyone bounced on your balls lately?
He looked really shocked, he took a step back, the whole of his face was shaking. Do you think that could do it? he said.
Christ aye, I replied, looking serious. But the state of his face, the worry, his eyes folded up under tatters of skin….I just couldn’t help it, I let out a laugh.
I don’t think it’s funny, he said.
Och grandad, I told him. I’ve been having you on. I wiped at my eyes with my fingers. Its just the rust in the cistern gives water that look: you’re fit as a fiddle, my friend, I bet you can pee straighter than I can!
Jesus Fuckeroo, he said. You bastard.

(Both stories from ‘Bucket o Tongues’)