Poems from the Backroom 99: Aileen Ballantyne 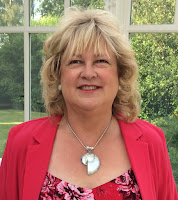 "Many poets struggle to make connections between the lumpy thing called Real Life and the shiny thing called Poetry" said Ian McMillan. That may well have been true once, but not, I think nowadays, when poets operate mostly in the real context of their times and the world around them. There are few ivory towers left, and the world is too intrusive and horrible to ignore. Nonetheless we operate always in both the dark and light, seeking to entertain as well as cast dark reflections.

Aileen Ballantyne, our guest in the Backroom, won the Myslexia Prize in 2015 for a series of poems about the Lockerbie Disaster, an event that some of us down here know a lot about, some perhaps wishing they knew a bit less than they did. When great disasters strike it is the job of poets to record them- Douglas Lipton's poems on the same topic 'Songs for a Fallen Angel' spring to mind too- and the best records are the simplest and smallest: the human scale dignities and tragedies we want to preserve, remember and contrast to a world gone nuts.

Three of Aileen's very moving Lockerbie poems are attached below, but she has chosen a lighter poem for the film, 'Winter’. Though not that light; wanting to swap Scotland for somewhere else less thrawn is a very serious topic that I've explored many times myself. Many of the poems in her recent Luath collection involve flight, literal and metaphorical, as well as an obsession with North America.

Aileen Ballantyne is a national newspaper journalist turned poet. She was the staff Medical Correspondent for 'The Guardian' and 'The Sunday Times'. Her journalism has twice been commended at the British Press Awards and her news features on AIDs in The Sunday Times won the David Boyle (Erskine Hospital) Memorial Award at the Scottish Press Awards.

Aileen recently completed a PhD in Creative Writing and Modern Poetry at the University of Edinburgh, where she now teaches an undergraduate course on Contemporary Poetry. In 2015, as well as winning first prize in the Mslexia Poetry Competition, she won the short poem category at the Poetry on the Lake Festival in Rota San Giulio, Italy. In 2012 she won the Scots category of the Wigtown Poetry Prize. In 2018, she received the prestigious Scottish Book Trust New Writers' Award.

Taking Flight is her first poetry collection, published this year by the fabulous Luath Press.

Here she reads 'Winter', from that collection:

A review of 'Taking Flight' in 'Write out Loud':


I want to be in part of the planet that's hot,
drinking frozen green-lime margaritas
in Hemingway's house in Key West,
stroking the fur of a six-toed cat
that’s called Frank, or Errol or Marilyn
to the sound of a house-fan
that purrs with molecular heat.

I want to be cooling the sweat
of the sun on my legs
in the long crystal swathe of his pool,
breathing great gulps of moist air
as I rise and I fall in its pulse.

I want to walk out on Duval where the scent
of white jasmine still lingers,
watch Louisiana pelicans swoop
for silver-scaled fish
in the salt and the swell of the Gulf,

beat hard on the gong and the drum
at the going down of the sun,
celebrate each breath of red sunset
with bagpipes and brilliant bandanas.

He can see them
where he found them,
lit by the beam
of the torch on his forehead,
untouched, it seemed,
by the fall.

He hoped
they had slept
but knew they had not:
those two young women
he found in the dark field
that December night

still strapped
to their plane-seats,
their arms
tight around each other,
their fingers crossed.

Ruth saw a hand on her roof
and told the police.
Jessie made 200 scones
for the rescue workers.
Her dog fetched an arm
to the door
and she wrapped it in a cloth.

When the people came
from far away
about the t-shirts and the jerseys,
the notebooks and the backpacks
of the dead sons and daughters

that fell on Ella’s house,
she gave them tea,
and helped them to find
their children’s possessions.

And when the mother travelled,
with pieces of glass and sand
from the surfing beach
her son loved,
Ella helped her build a cairn
on the hill near Tundergarth
and sent her home,
different
from when she came.

It was the toothpaste that nearly defeated them.
It was there in each suitcase: each tube had exploded
over every shirt and blouse they tried to mend,

but one washed, one ironed and one folded,
until each trace of the blast,
of blood and of fuel was removed,
and at last, after seven years of waiting
the clothes of each son, of each daughter,
were returned to each mother, to each father,

and the unread pages of a journal
of a girl who lived to twenty
were unfolded, leaf by leaf,
ironed one by one,
her words returned
clean and washed in their pages.