Poems from the Backroom 100: Graham Fulton 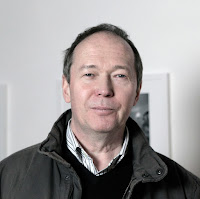 Apologies are due to the poet Anne Fitzgerald who was due to appear, but whose video poem fell into a previously undetected #plaguepoems sink hole. Hopefully we will still feature it in the few days that are left in the project.

There’s something about working for the cooncil that brings out the quirky and surreal in a poet: maybe it’s a stark contrast to the routine. Look at Brian o Nolan and his mad anarchic worlds. “The rhythm of poetry and the routine of work are interdependent for some poets” said another council employee, Daniel o Driscoll. Graham Fulton has combined a 30 year stint with Paisley Council with a career as a poet, publisher, pamphleteer, live performer, artist, photographer and local historian.

During that time he has developed a huge body of work, unsurpassed I would suggest by any contemporary Scottish writer, seventeen full length collection and fifteen pamphlets of poetry as well as a myriad of publications on other topics, like local history, architecture, cats, dogs, you name it. His bibliography is a poem in itself. Although his first collection was published by Polygon in 1990, the vast bulk of his writing has taken place and been published outside the mainstream. He has been very much his own man with his own style - everyday subjects revealing universal truths with an accompanying and ambushing humour.

Recent book publications include 'Circulation' from new Paisley-based publisher Clochoderick Press, 'Something Good Will Always Happen' from Penniless Press Publications, and 'Flesh and Stone', a book-length poem about Loch Craignish and Kilmartin Glen in Argyll, from Controlled Explosion Press. 'Glitches of Mortality' from Pindrop Press was published at the end of 2018.
In 2020 a collection called 'Chips, Paracetamol and Wine' is being published by Smokestack Books, and in the last three months during lockdown he’s written a 200 poem sequence called 'Coronaworld' which should also hopefully be published this year.

Here he is reading three poems from 'Coronaworld':

I wouldn’t hang around
for too long little deer


run all the way
home to the gravestones

the two-legs
are coming back