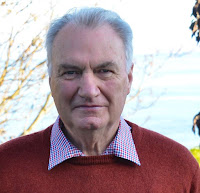 There are a few Scots and Gaelic writers among the last fifteen in the #plague, to add to those who have gone before, and excellent they are too. These languages are modern as well as ancient tongues, and therefore should address modern topics and concerns. There's an expectation among some people, as far as Scots is concerned certainly, that it is a language of whimsy, pawky humour, all right to discuss the weather in but not the arms race, Palestine, racism or Coronavirus. Of course our plague writers have proved them wrong. I am thrilled to welcome Maoilios Caimbeul into the backroom today, he is a formidable Gaelic scholar and poet, and I am even more thrilled that his poem is a Gaelic poem about the pandemic.

Maoilios was born in Skye and has returned there to live. "I set the values of love of place, of community,” he says, "over capitalist and market values which see everything as something to be bought and sold for profit." He was educated in English - no Gaelic medium education then, even in the language's heartland- and only began to write poetry in Gaelic in his twenties.

After graduating from the University of Edinburgh he taught in Mull, Skye and latterly Gairloch. From 1984 to 1987 he was Gaelic Development Officer with the Highlands & Islands Development Board. He has also written eight novels for children and a novel for adults. After retiring from schoolteaching in 2004, he taught part-time at the Gaelic college Sabhal Mòr Ostaig UHI. He was part of the scriptwriting team for most of the popular Gaelic TV course for learners 'Speaking Our Language'.  He was crowned Bard at the National Mod in 2002 and has been Honorary Bard of Comunn Gàidhlig Inbhirnis (Gaelic Society of Inverness) since 2012. He is an Honorary Fellow of the ASLS.

His Profile on the SPL site and 5 poems:


Am broc is an rodan,
am marmot ’s crogall,
iad a’ bìdeadh air ais;


The badger and rat,
the marmot and crocodile,
they’re biting back;

the ostrich and peacock,
all creatures in cages,
they’re biting back.

As happened in Wuhan,
all of the beasts
are biting back;

cosmic law cries
don’t cage us in
or suffer a bite back.

Venomous viruses
will plague and ensnare
with their biting back.

The world is for all,
– if not, the result
will be a great bite back.


You are my village tonight,
remarkable your lights,
warm glow in the moor’s bleakness.
High above Shore Street
your other streets rise –
streets like a soft carpet –
and my hands will feel your paths
and my heart your heart.
Woodland and tree between the ways,
they will rise on the summits
and the knolls will be soft with moss
and the moss with dew.

You are the resplendent village,
little village by the wave,
secret village of my love,
tidal village and earth village,
village of the soft breasts,
village that will ease from self
and keep us folded as one.

When you lift your summer skirt
I will dance on your meadow,
and we will ascend the steps
up from the edge of the sea
until we are above the world,
and I see you lying below me
like a diamond in the kyle.