Poems from the Backroom 78: Ali Whitelock 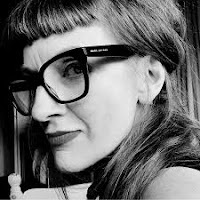 I first met Ali Whitelock in Edinburgh at the Poets Republic occupation of the Scottish Poetry Library last year. Over a couple of days which saw some amazing performances from a squad of writers from all over the world, her reading stood out as a highlight. This was my first experience of the Ali phenomenon which I will forever associate with the acronym OMG, so often is it deployed in her direction.

Ali has taken the music of the Beats and converted it a to a brash, funny, extravagant contemporary female narrative. She is the natural, anglicised, inheritor of her fellow Scot Alison Kermack (Flett) and has the same need to be 'writin like a bastard'.  It’s a mix of poetry and stand-up and its subject matter is the common gist to our mills: heartbreak, death, simple messing-up. Ali is the sound-track to our increasingly confused and complicated lives. She strikes countless chords. And performs her work brilliantly.

Ali Whitelock is a Scottish poet and writer living, like Alison Flett, in Australia, in Ali's case on the south coast of Sydney. Her debut collection,‘and my heart crumples like a coke can’ was published by Wakefield Press in 2018, with a forthcoming UK edition by Polygon next year, and her second poetry collection, ‘the lactic acid in the calves of your despair’ has been published by Wakefield Press recently. Her memoir, ‘Poking seaweed with a stick and running away from the smell’ was launched to critical acclaim in Australia in 2008 and the UK in 2009. 'this is coal don’t be afraid', her 'found' response to the bushfires in Australia received astonishing public attention, including from the former PM of Australia, Malcolm Turnbull. There is a link to this below.

Her poetry is 'Brilliant. Funny, heartbreaking and a bit wonky' said Graeme Macrae Burnett, just one of many storming reviews. We agree!

Here she is reading Part Two of 'not much of a mother in four parts':

Lots of information, poetry and reviews on Ali's website here:

Interval with the journal 'Backstory' here:

'this is coal dont be afraid', Spotlight article by Wakefield Press here:


not much of a mother in four parts:


after the hysterectomy my seventy year old friend Hamish
asked if it would affect my ability to have children. under
normal circumstances i’d have laughed, taken out my highlighter
drawn a fluorescent yellow circle around his stupidity. this time
i merely nodded, thanked him for asking and the waiter brought
the scones, the danish, the strong black coffee. i ended up getting
two cats. there were six kittens in the cage to choose from.
i chose the two that sat alone in opposite corners to each other––
each of them staring out into their own very separate horizons.
i have always gravitated in the direction of lovelessness.
this relationship i’m in now has love on demand. it is a two litre
carton of full cream milk that sits in the fridge, there is no best
before date, the level never goes down and i have yet to pour
my cornflakes into my morning bowl only to open the fridge
door and suffer the crushing disappointment of no milk.
sometimes i don’t know what to do with love like this.


who’s a pretty fucking boy then?

how is your soul? your unleashed fears that too

quickly filled the corners of your mind before
the too fast river of them burst into alcoves
and crannies you didn’t even know you had and budgie
mirrors on chains swung violently from side to side with the chaos
of your terror spraying bird seed from here to hell
as your worn out beak tapped out an SOS on the cuttle
fish of your confusion and the tiny bells tied
to your cage tolled as your justified despair
magnified through the +10 lenses of your tears
spilled over and filled the room like an oversized
elephant saying who's a pretty fucking
boy then?