Poems from the Backroom 126: Catherine Wilson 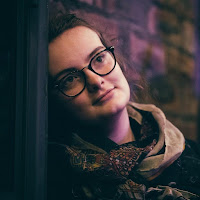 I've always wanted to represent Scotland at something. I couldn't think of anything better. I suppose the nearest I came was representing South west Scotland Schools at a rugby match where we were defeated 66-0 by English Grammar schools and my job was to mark John Carleton who went on to win 26 full international caps for England and help them win the Grand Slam in 1980. I remember he had real show-off boots and ran at about 200 mph. Such disappointments turned me to the doleful world of poetry, I suppose. But imagining representing Scotland at Poetry! Catherine Wilson has done this many times and so is my hero.

Catherine Wilson is a spoken word and writer based in Edinburgh. Her writing has been commissioned by organisations including BBC Radio Scotland, BBC Radio 4, The British National Gallery, TEDx and StAnza Poetry Festival. She has been published in anthologies by The Scottish Book Trust and Sabotage Reviews. Whilst studying at the University of Edinburgh she ran the largest free poetry slam in Scotland and the open mic “Soap Box”. She also represented her university in their winning team at 'UniSlam 2016', the' Hammer and Tongue Team Slam 2017' and were the first non-American team to compete in 'C.U.P.S.I'. in Austin, Texas in 2016. In October 2018 she represented Scotland at the Transpoesie Festival in Brussels, where her work was displayed on the Brussels metro system. Also in 2018, she was selected as one of the YWCA Scotland’s 30 Under 30 - a list that celebrates the most inspiring women under 30 in Scotland.

In 2020, her poem was the winner of the poetry category of the Scottish Mental Heart Arts Festival’s writing competition. She also received a Micro Commission by StAnza Poetry Festival for her digital poetry project “Homefound”, where she created an online poem by crowdsourcing words in an international photographic scavenger hunt. She is on the board of trustees for YWCA Scotland, and the Poets Advisory Group of the Scottish Poetry Library.

A great anthem to humanity here from Catherine Wilson, a song for the disparate and wonderful things that add up to each kaleidoscopic day, even in these reduced times. Some poets let the days steamroller them and write from the ruts, others pick at the ironies and edges but this poet is studying the world, rejoicing in it and isn't afraid to tell us all about it. It's a refreshing and optimistic deluge of sensation and acute observation. Being informed by tragedy - and Catherine has, as she describes in her poem 'My Sister' linked below- but yet still greeting each day's 'everyday miracles'.

I share my streets with philosophers, builders,
lawyers, runners, trombone players, tram conductors,
women who wanted to be scientists when they grew up,
the picture book writer who stamps inspiration
into the pillow creases of small minds

I want to snap this crown in half to gift it to the sad faces pressed on the bus windows
or the young widows, or the elderly who still volunteer every Sunday,
or the little girl who gets bullied at school for the way her front tooth refuses to fit in

I want to love these clumsy gods
until my heart breaks
until I can't conjure up the words to do humanity justice
until the only skill I can write on my resumé to explain the gaps is:
"people watching, 22 years"

I want to collect more stones
pebble dash my pockets until I am heavy with possibility
leave them next to graves instead of flowers that float away
on the breeze
their presence persistently marking
once: they were here
they did this
watch the sand shift around their existence

In the beginning,
we were Callendish and Brodgar:
tombs where we laid the dead

Gaelic tongues that have since run themselves
smooth

we are
fresh seafood

Catches caught in lobster creels
Cracked hands of the fisherman

We are the train journeys
that take us from Aberdeen to Glasgow Queen Street
calling at Inverness, Dundee and Edinburgh Waverley

We are the towns that could only belong in
this
country
Golspie, Larbert,
Auchtermuchty
Finstown

We are farmers
plumbers, engineers,
musicians and inventors

We gave humans the Internet,
The BBC,
The pneumatic tire
and Billy Conolly!
We are Ian Rankin mysteries,
found down Fleshmarket Close,
Conan Doyle on the Streets,
Muriel Spark in her prime,
uncensored Galloway and Welsh,
what bred the words of George Mackay Brown,
Edwin Muir and Morgan

We are mouthfuls of rock,
that spit out runes,
we are hearts full of fire,
ready to pass on the flame to the next generation,

we are the nation
that take on
seagulls
in the battle for chips!

We are hobbled on cobbled streets
sung to sleep by sore feet,
we are unamused David Hume in our
jay-ckets
shan, square goal and raj,

We are crabbit this morning,
peedie and lang shanks with shmucks,
burglar alarms and Curly Wurlys

We are forests
We are mountains
Ben Nevis, John O’Groats to Loch Muick

and we are more
we are not Scotland the Brave
not one-dimensional Gryffindors,
we are the Hufflepuffs of Europe,
we are strong, hardworking and reliable,
We are Scotland the More!

More than
White male Etonians making our decisions for us,
More than your drunk deep-fried Glaswegian stereotypes
Which are
delicious
by the way

We are more,
More than can be contained in one poem in four minutes

We are more Auld Lang Syne
mispronounced at Hogmanay

We are more
than just Burns poetry

because Britain
is not one nation
but four
and Edinburgh
is not the Athens of the North
Athens
is the Edinburgh of the South!