Poems from the Backroom 112: Stewart Sanderson 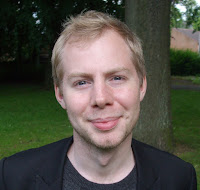 Another marvellous poet looking into the black waters that are our past is Stewart Sanderson. It's a comfort that while we're generally bombarded with a history that is not our own, or our history represented as a footnote of another's, our poets are picking away at the seams, illuminating the gloom. Gloom doesn't come much gloomier than the so called 'Dark Ages' which have been fertile ground for poets, like Gerry Loose, previously in the series. I remember years back a few of my poems being included in a very worthy volume by Mainstream called 'Scottish History in Verse' and taking an awfie slagging for the fact that they were completely made up but I believe this is what history is essentially all about, and the History of the Dark ages particularly. Not "inventing" as Eavan Boland said, "but revealing". The ghosts and echoes of the language of the Picts can tell us about our condition now, as can the hopeful interpretation of the ancient wax tablet Stewart is describing in his video poem. Two Dark Age poems of Stewart’s are below.

Stewart Sanderson was born in Glasgow and is the recipient of several awards and commendations: In 2017 he received commendations from the PN Review Poetry Prize and the Stephen Spender Prize for poetry in translation. He received an Eric Gregory Award in 2015. In 2016 he was awarded a Robert Louis Stevenson Fellowship.In 2014 and 2016 he was shortlisted for the Edwin Morgan Poetry Award, and has been this year, too, in 2020! I am confident that his presence in #plagueopoems will ensure victory when the award is announced during the Edinburgh Book Festival.

Listen to the wind
where this language was –
the whisper as it passes
through the long
grass at St. Vigeans,
the leaves at Aberlemno.

Read on past the pause
where its king list
ebbs away into the waters
of a new tongue: so the river
Ewe runs downhill
towards its sea loch.

Reach out and touch
the topsoil to which
its syllables remain
attached: an anchor
lodged in sand years after
the ship has rotted.

Throw one last log
on the fire as you pronounce
their names – Nechtan and Brude,
Drostan and Drest – then let
them blend like smoke does
with the midnight air.

A hollow like a human foot
incised into the living rock
which I filled with my walking boot
one day, daring the sky to crack

at my temerity: but no
somehow the vault of heaven held
and holds, however many go
to do what only one, who ruled

the rest, was ever meant to do –
to stand where he might see his lands
unfold, then swear he would stay true
to what he saw. The image sends

a subtle tremor down my spine:
it would be good to promise this
and feel, behind you in a line
the others who came to this place

before you did, to prove their worth
by slipping off their hidebound shoes
and, bootless, promising the earth –
its browns, its greens, its greys and blues.