Poems from the Backroom 121: Vivien Jones 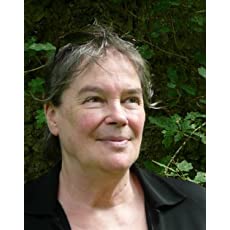 A stalwart from the north shore of the Solway in Dumfries and Galloway, Vivien Jones has been the force around which the magazine 'Southlight' has grown and prospered. Vivien plugged the gap left in the area after the long lived magazine 'Markings' edited by John Hudson folded, John having, we all thought, departed to life as a viticulturist in the steamy south of France. Turns out he was living in a garage in Castle Douglas all the time, but this in no way diminishes Vivien's achievements.

Scottish culture needs people like Vivien who dedicate huge amounts of time and effort to promoting literature local and otherwise for little remuneration and reward. The whole fabric would collapse if it were not for folk like her. If you see the whole of Scotlit like the kind of triangular diagram I used to give to kids illustrating the feudal system or serfdom under Alexander 11 of Russia, the tiny number of poets teetering at the apex and being supported one way or another by public money and the warm approval of their mates in the Universities or the media, depend on folk like Vivien, Annie Mowat in Moniaive, Sandy Yanonne,  Rose Ritchie, Finola Scott, Jim Macintosh, Andy Jackson, Neil Young and a thousand others (I quote simply the names that come immediately to mind) who grub away at the grass roots, showing ordinary folk the joys and importance of poetry, cultivating a love for it.

Vivien Jones has two poetry collections and two short story collections in print, 'About Time, Too' was published by Indigo Dreams Publishing in 2010. Her short fiction collection on a theme of women amongst warriors 'White Poppies' was published in 2012. In 2010 she won the Poetry London Poetry Prize. She has had numerous inclusions in national and international anthologies, and has had work broadcast on Radio Scotland and Radio 4. She has written short plays (for which she won a national award) working with actors and directors to bring them to performance.  She has organised and been involved in numerous projects with local people and writers including 'Tidemark', poems on the Solway shore, ‘Finding a Voice’, giving voice to the women subjects of 19th/20th century photographs,‘Records of War’, a project in response to an exhibition in local museums on WW1, 'Lovely Nelly', the story of 150 families who left the Solway for Prince Edward Island in 1775, and others.

Oh yes and she also plays in a Medieval band.

Her own poetry is tender, observant and often sensual. It deserves to be much better known. Here she is reading 'The Hardest Thing':

The 'Lovely Nelly' project on the Wigtown Festival website:


I’m long done with shopping
for the sake of it,at seventy,
no desire for new clothes,
I shall never read all the books,
listen to all the records and CDs,
that I dust from time to time,

We are rural,paid our mortgage,
run a decent five year old car,
Cook well and economically,
walk each day through deserted
woods and shore, greet neighbours,
and we have each quarrelsome other.

But
I can’t touch my grandchild,
one quarter me,
feel her warm oval head
in the crook of my arm,
can’t hug my son who glows
in the light of his first-born.
It’s the hardest, the softest thing.

Piercing the shadows of narrow alleys,
the dusk sun sneaks a low beam
onto a sign board – Al Brindisi AD 1435 -
yet another ‘oldest tavern in Europe.’

Banquettes, dark wine bottles
behind chicken wire frames,
a wooden board with cheese
spiralled from mild to ferocious,
the waiters whisper and offer
only expensive wine.

My place mat, made of brown paper,
says that Tasso and Cellini ate here,
so did the student Copernicus,
who, on seeing this same sky,
thought up earth moving heresies.

So do I, walking slowly back,
seeing the full moon through
the open oval above a courtyard,
thinking of the curious Copernicus,
a moment’s dizziness may just
have been the angle of my gaze,
but it felt like the moon sucking.

The moon, too, yearns
to see beyond clouds,
we look for silver on prussian
she looks for blue and green,
both cursing the intervening
veils and blankets of cloud.

On cloudless nights, out of the sea
she rises orange, shrinking,
paling to a naval button,
making the sea shimmer, glass glitter,
a palette of cocktail fabrics
draped across sightlines.

Hand me down light,
from her pale flat face,
a blue-veined vanity
proud of the great cheese
that once fooled a fox,
the Moon in a bucket.