Poems from the Backroom 123 : Clare Phillips 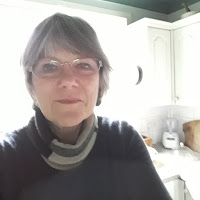 There is much talk of borders. The opinion that there should be less borders rather than more is a valid one in a kind of Star Trek United Federation of Planety sort of way where, as in the Bridge of the Star Ship Enterprise, careful attention and respect is given to different ethnicities, their history and cultures, but if having no borders means being assimilated by someone else's history, culture and political system then its a pretty good argument for having one.

I remember being in a train from London to Edinburgh before the very first devolution referendum in Scotland in 1979 and a bunch of young Liberals getting on in Carlisle and putting on armbands as we crossed the border and going through the train asking for passports. We were meant to be appalled but I was thrilled. Imagining leaving a land where the Tudors were thought of as sexy Gods and entering one where they were rightly thought of as genocidal maniacs! The English think they invented passports, of course, just like they think they invented football and everything else, but of course it was James I of Scotland who invented them, specifically to give to English pilgrims to make sure they went home again after a week.

Nowadays of course Dumfries and Galloway is full of folk who have come from a the airts to make their homes here and throw themselves vigorously into local life and culture, and politics. In a region where demographic and economic stagnation is the norm, new blood is great, and nearly always positive in its impact. In the wee writing group I frequent in Wigtown we have a variety of accents, two Scots, three English and a New Zealander. And of course all have one thing in common, poetry, and their love of it. If poets ran things there would be no need for borders.

One of our writers at Wigtown is Clare Phillips. Clare has lived and worked in southwest Scotland for almost thirty years. She has been reading and writing since 1985 and has had poems published in a variety of places. A short pamphlet 'Two of Things' was published by Markings in 1995. A hiatus of sorts occurred till she returned to poetry- or taking poetry seriously- recently since leaving her job. In 2018 she was chosen by the Wigtown Book Festival for special mentoring and in 2019 won 'The Fresh Face' prize in the Wigtown Book Festival, winning a course at the writers centre in the Highlands, Moniack Mhor, where since the other writers took exception to the fact she had a cough, she was quarantined with only poetry for company, which would probably have been a blessed relief and essentially the idea in the first place.

Her poetry offers different insights into her past, reflections on nature and a burning interest in current problems, particularly climate change. In the poems here, feeling and language are perfectly distilled and in pace, creating the effect that a good poem should, both an emotional and physical sensation, like downing a good whisky.

Here she is reading 'A Change in the Weather':

A Poem in the Glasgow Review of Books:


A Change in the Weather?

The noise in the night that
had me invigilate tests sat by drunks
in the street for hours (the grin of my
alarm clock marking sleep leaked
to dark) dripping power lines
identified in the morning
as rain, the licked black look
of the town almost nostalgic
after two months of drought.

Checking emails over coffee
I google petrichor, discover it’s
perfume raised from parched
grass by a shower
stymies seed growth
means blood of the gods
out of rock in Greek
start to map out
a different day

but already the roof
of the sky is flaking away
grey’s turning blue, nothing
new here after all;
still lockdown, climate change
infinity to look forward to;
a stroll through summer
from a promising spring
to the ease of autumn
still an eternity away.

My phone’s just invented Garomshire, a county down
south where my friend tells me ‘cases are high
but we’re ok for now’. Pity it can’t predict
how steeply the incline
of pandemic panic
will climb today

and maybe, just maybe ‘in these difficult times’
this intelligent android, also gone viral
will be set back,
left to rock on its heels
emitting its meaningless gibber.
A monkey emoticon coming to life as it’s dying away.