Poems from the Backroom 110: Chris Boyland 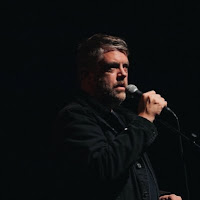 I was talking recently about the rise of the video poem, which comprises the core of this blog of course. I was late to the medium and when Robert Campbell Henderson provided film to the words on the 'Blash o God' project last year I was delighted at how the apparent disconnect of word and image he chose really worked. There's a long history of poetry and film of course, which blossomed in dadaist circles in Paris and elsewhere in the twenties and thirties. Man Ray's fantastic ‘L’ Etoile De Mer’ based on a poem written by surrealist poet Robert Desnos, for instance.

Computer and digital technology has allowed for a creative explosion of animated poetry. Tim Burton's first animation in 1982, 'Vincent' was based on his own poem of the same name, in which a small boy dreams of becoming Vincent Price and scares himself to death. Local to me, the Dumfries and Galloway Arts Association enabled the brilliant Hugh Bryden to do animated film poems for a variety of D and G poets in 2008, and the form goes from strength to strength. Our guest in the Backroom today is Chris Boyland and his two fantastic animated poems, 'The Letters' and 'The Towers' are linked below.

Chris Boyland was born in Coventry and lives in Cumbernauld. The Scotsman has called him“dream-like, smoky and contemplative”. His poems have been accepted or published by magazines and anthologies such as: '404Ink', 'Gutter', 'The North', 'The Poets’ Republic' and 'New Writing Scotland'.

His debut pamphlet ‘User Stories’ addresses a mixture of intimate and shared scenarios and looks at the public concerns we all have -pre/post-Brexit, pandemicised Britain- through the perspectives of past and present. Its "twenty short pieces are examples of poems that are window panes rather than mirrors, that take as their starting point the writer Hanya Yanagihara’s edict that 'the world outside the self is worth writing about'”.

'User Stories' is available from the independent, Scottish small press Stewed Rhubarb and there is a link to buy this below: Here is Chris Boyland reading 'Letters':


Over the town, it rains letters
written on good notepaper
on exercise book paper,
on anything at all
scraps and screeds and tracts
fluttering from the sky, like falling kites
each one anonymous, addressed only, ‘to my love.’

In the absence of names, people make up stories
‘There’s a letter here’, they say, ‘for everyone in the town.’
and they scurry about, trying to find theirs
reading from letters draped over clothes-lines
and lying on pavements.

The wind catches handfuls of paper
and blows them along the streets
unwanted letters lie soggy and bleeding ink in gutters
until men in overalls come and sweep them into heaps
‘Where do they come from’, people ask,
‘who has written these words, these thoughts, these ideas
these lists of things not to forget?’
‘And, why are they falling from the sky?’

I know, but I tell no-one. I collect as many as I can.
Lay them out on my kitchen table, smooth away their creases
and read them and re-read them, over and over and over again.

(Animated film produced and directed by Sarah Grant, creative vocals by Wils Struthers,
music composed and performed by Fiona Liddell-Thorne, based on an original arrangement by
Jen Hughes, recorded at Unit55 Studios, Cumbernauld)


High over the city, at the bottom of the garden
far off in the distance, at the end of our street
stand the ghost towers

Nobody talks about them
but we make a daily obeisance
to their looming presence
that presses on us, like a blood clot on the spine

Families light candles, in the mornings
and at meal-times and place them on household altars
with other charms and relics, citizenship paper
coins and notes, bank statements and and letters from the DWP
to ward off the long shadow, the darkness at the door

Sometimes the charms protect us, often they do not
and we wake in the morning
to see that our neighbour’s house is empty
that our friend is not there to meet us on the way to school
that someone else we know has gone, to live in the ghost towers

We see the spectral tenants of the towers
around the city, in the streets and in the parks
transparent hands outstretched
calling out, reaching out, to passers going by
who mostly, ignore them

After a while, they fade
and fall between the cracks
and no-one sees them anymore

Except at night
when we wake up in our shaking beds
to the cold, bright light shining through the window
and we look out and - there, in the distance
there, at the bottom of the garden, stand the ghost towers
white as salt bleached bone
every window lit up with an electric imprecation
every window with a face, pressed against the glass
and we know, though we cannot hear them
that every face has a voice and every voice is calling

And in the morning, they are gone.