Poems from the Backroom 120: Miriam Gamble 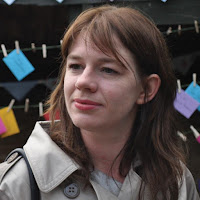 I think the last poetry reading I read at with mair than three folk and a labrador in attendance was a well stowed and vibrant occasion at St Mungo's Mirrorball  in November last year at which the Northern Irish poet Miriam Gamble was the start turn. She was an excellent reader and having been entertained since by her recent book 'What Planet', published by Bloodaxe at the end of last year, I feel that she's my kind of poet in that she's consistently humane, consistently accessible and consistently entertaining.

I think a poet's job is to give us angles on the ordinary that bring us up short, shock, surprise or delight us and there’s nothing I like better than a collection full of such day to day observations, as diverse as thought itself, comprising both an almanac and an atlas to the poet’s own heid. I thoroughly recommend Miriam’s poetry in this, and in other regards. Go and buy a book, you’d be daft not to.

Miriam Gamble was born in Brussels in 1980 and grew up in Belfast. She studied at Oxford and at Queen’s University Belfast, where she completed a PhD in contemporary British and Irish poetry; she now lectures at the University of Edinburgh. Her first collection, 'The Squirrels Are Dead' was published by Bloodaxe in 2010 and won a Somerset Maugham Award; it was followed by 'Pirate Music' also from Bloodaxe in 2014. She has also received an Eric Gregory Award, the Ireland Chair of Poetry Bursary Award and the Vincent Buckley Poetry Prize.

Here she is reading Sometimes Nothing:

Her author page from 'Bloodaxe', links to  'What Planet' and videos of more poems:

The Oak that Was Not There: A video:

An edition of Skylight containing a poetry Masterclass by Miriam

She never did it, the girl you were supposed to meet
in pink slippers and dressing gown
in what seemed the dead of night
after the world had gone to bed.

Sodium lights still garnished
the suburban street
with the gladsome hue of territory.
You waited on the curve of the road.
There was nothing in particular to see.

In what claimed to be the dead of night
you stood alone
at the mouth of her development;
sodium light still salad-dressed the street. What

were you waiting for?
You'd always known she wouldn't do it.
You leaned flimsily
against the curve of the road

where the remnants of a wood
you'd never had the name for scythed
on its cluttered stream
through the new developments,
and no bough juddered in the capricious night.

You stood gilded by the sodium light
as fat forms riffled through
your parents' garden;
you fought to keep yourself concealed
from the nothing that was there.

You wanted to go midnight walking. Where
were you going to walk to?
Through the developments, the pepper sniff of woods?

You, scuffing down the road
in you slippers and your wee fleece dressing gown.
You went home again, you climbed the creakless stair.
You dreamt the dreams that were appropriate.

From the big screen, and larger than life for a week or two,
which is all a tangent universe can stand,
we take them home and introduce them to our modest living quarters.
Their baby blues stare out at us at all hours of the day and night,
prompting every manner of ridiculous thought, such as:
‘The world is small’; or ‘What if Elvis could have taken to my mother?’;
‘I will ride across the desert on a purple roan, or some such,
for anything is possible’; and even that old chestnut,
‘There is only one for everyone alive.’ The cat mewls
at its perpetually empty bowl, the work piles up on the desk,
but we simply say, with a new-found recklessness:
‘This is not the most important thing in my life right now’;
‘you’re a predator, catch your own’. We exist
in the bubble of our making, our souls glistening like celluloid,
by turns rock bottom and on fire. What causes it to disappear?
Who can know, but one day we double-take to find ourselves
filing them away in the rack of lost hopes
with the show-jumping videos and ‘twelve easy tunes for classical guitar’,
the cat purring as it settles on the easy chair, as if to say
‘What then, what then’, the sky sucking back its thunder-claps
and storm winds, saving only one small cloud, which loiters there,
putty grey, shedding rain like tiny lead balloons
on the pristine terraces. And somewhere else a universe explodes.