Poems from the Backroom 129: Ian Stephen 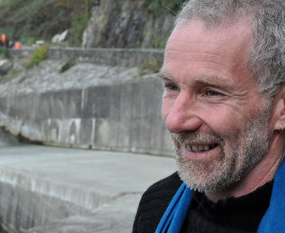 Ian Stephen here, live from Vatisker in the Island of Lewis, giving us a tour of his Lewis blanket, and his poem from 'Scotia Extremis' on Jack Bruce, the Bishopriggs lad who became the world's greatest bass guitarist and wore out two livers in the process, the  'master-mariner/when all the breezes/were out/of the ministry of bag". Ian Stephen is a nimble poet, not just in the agility and fluidity of his words, but because he's all action, a sailor, a rock climber and photographer. Check out 'Blue Bonnets' below, where he is hanging off a cliff like a monkey. I was hoping trick photography was involved but I fear not. Ian Stephen is fit as a fiddle and what a writer!

After 15 years in the coastguard, Ian Stephen became a full-time writer of poetry, prose and drama in 1995. He was the inaugural winner of the Christian Salvesen/Robert Louis Stevenson award in 1995, and in 2004, he was the first artist in residence at StAnza, Scotland’s annual poetry festival. In 2002-3, he navigated the sea-route, suggested by a traditional story, connecting Sweden and the north of Scotland and the story was sent as instalments by satellite-phone to a computer at the 50th Venice Biennale.

Among his earlier poetry publications are 'Malin, Hebrides, Minches', with photos by Sam Maynard from Dangaroo Press and 'Varying States of Grace' from Polygon. 'It’s about this' published by Nomad/ Survivors Press, from a poem-log of a voyage to Orkney, was commissioned by StAnza. A bilingual edition of his poetry, 'Adrift / Napospas vlnám', was published in Czech in 2007. In 2016 Saraband published his selection from 35 years of making poetry from observing seaways and shorelines as 'Maritime'. He is also an accomplished playwright and novelist, his most acclaimed novel 'A Book of Death and Fish' being published by Saraband.

An Interview with Ian Stephen plus Ferry footage!

'Blue Bonnets', a poem recorded half way up a cliff

A Virus Diary published in AnnLanntair:


The cellist came out of the academy
to lay down his melodies
when rhythm was on the line,
only one of his crimes
delivered at a pace
on the upright bass
not all that tender
on the six string fender.

The baker walked out of the jam
till the cake was cut with Cream
congealed.
How many rope-ladders
over the bearded rainbow
would it take
to touch the moon
sure as Armstrong?
Only one –
if it was long enough
and it was.

The lyrics of fate
over four strings
sounding like eight
syncopating
the pounding heat
from the baker back on the job,
so no-one was robbed.
A guitarist just in the lead
by a narrow neck.

The three-piece
gone off the rails
but in the groove
of spinning vinyl –
Corryvreckan
in technicolour.
Shipwrecks of
wailing bluesmen.
A stumble ashore
rolling and tumbling
casting out chords
like shining barley
on a slick of honey.
A parley with the shadows
of bottle-neck heroes
and music-hall maestros.

The set of wheels
went on fire
but your covered wagon
stitched its way
across its prairie
to elegy.
A fabric
picked and unpicked
by the pricking apostrophes
of Penelope
and the tailor
you had to sing to
so his paraffin
vapourised
in the hurricane.

Many’s the riff went
over the cliff.
Jack, one hell of a lad,
a banshee mourner,
tall-story teller
but a master-mariner
when all the breezes
were out
of the ministry of bag.

In Breton, they say
there’s a word that weaves between
green and blue, allowing for
haze, precipitation,
the burr of distance,
the welcome shock
of escaping light
warming your shoulders.