Poems from the Backroom 122: Brian Whittingham 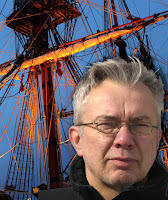 Some great stuff here from Brian Whittingham another Scotlit old timer, working away at the seams. Brian left school at fifteen and worked in the Clyde shipyards before becoming a draughtsman. In recent years Brian has been a Creative Writing FE Lecturer in the City of Glasgow College and a tutor and facilitator of poetry in the West of Scotland. He is currently Tannahill Makar for Renfrewshire, and also an an excellent poet in his own right. He's had nine poetry collections published, the most recent 'Walking Between Worlds' published by Red Squirrel Press. He's also been published by Luath Press, Mariscat Press, and Taranis Press. He's held fellowships in France (The Robert Louis Stevenson) and Yaddo in the USA.

He was editor of the brilliant 'West Coast magazine' and 'New Writing Scotland' and performed his steel-working poems as part of the BBC’s ‘Ballad of the Big Ships Live’ in Glasgow’s Royal Concert Hall in 2007’.

That's quite a biography and legacy. Since watching Vivien Jones play medieval music yesterday I've not been able to get that time period out of my mind, so I see him and Vivien and our like as the yeomen at arms who are left to hold the army together once the chivalry have quit the field to work for the British Council, or get some sofa space on 'Makar to Makar'.

The poem Brian starts off with here is a good old slagging off of day trippers in Glencoe followed by the rather more contemporary and chilling 'Tig You're Het':

His Authors Page at Luath, with details of other publications:

Taking Selfies In the Glen Of Weeping


In the carpark
The Three Sisters, look on
as yet another tour-bus disembarks.

If the tourists were to look at the view,
they’d notice the mountain
peaks shrouded by swirling mist
and slumbering cloud
that part on a whim
to reveal stray patches of blue
as if interlopers
on this, most Scottish of palettes.

They’d see peat-hags and scattered lochans
and tumbling waters
and if they really paid attention,
perhaps a herd of red deer
in amongst the clichéd purple heather.

However, these tourists, see little
in their quest for a perfect selfie.

With phone cameras
pointing at themselves, they perform
well-rehearsed celebrity poses.

Doing silly knee bends,
giving the peace sign like they know what it means,
donning masks of phoney smiles,

wearing skinny jeans full of designer holes
and white sneakers with no socks.

Walking through the park,
furtively, like a foreign agent
I try to dodge detection.

Avoiding the dog-walkers
the joggers
the meandering cyclists,

As if a participant
in the computer game; TIG YOU’RE HET
and the challenge is to stay away
from all human obstacles.

My get out of jail card
would be shouting, ‘Keys, ah’m no playin!’
sticking my thumbs in the air.

Then, for a moment I’d savour the serenity

of the Kelvin burbling
and unseen birds twittering
and feel the warmth of the sun
dappling on back of my neck.

Instead, I clock oncoming parents
out for a stroll
with kids on scooters and bikes
who will perhaps make me het,
with their innocuous invisible droplets

that may be lurking in the afternoon air.