Poems from the Backroom 124 : Stuart Paterson 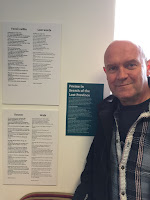 Sometimes I think there are about eight Stuart Patersons: one's on twitter all day; another is walking the Solway coast or round the hem of Criffel; one's on a bus scribbling a poem about the driver who happens to be called Robert Louis Stevenson; at least three are arguing the toss on a variety of subjects to a variety of people with various degrees of ferocity; one's applying for jobs; and one, the last one, is hanging about outside a pub wondering whether to go in and have a Clausthaler.

It's awfie hard to keep up with this number of Patersons but one thing is for sure and that is that there is a Stuart Paterson somewhere near you now and that he is steely-mindedly working at being a poet and preserving and promoting the poetry and the language he loves.

Stuart A. Paterson was born in 1966 and brought up in Ayrshire. He founded and edited the international poetry and prose review Spectrum from 1989 to 1996. Stuart’s first collection, 'Saving Graces', was published by Diehard in 1997 and nominated for a Saltire Society ‘First Book’ award. It is a wonderful lyrical volume, sadly out of print. Other poetry collections are 'Border Lines' from Indigo Dreams in 2015, 'Aye' from Tapsalteerie in 2016, 'Looking South' from Indigo Dreams in 2017 and 'heelster-gowdie / beul-fo-bhonn' from Tapsalteerie in 2017 with Marcas Mac an Tuairneir. He has had work published in many anthologies, including 'Dream State: the new Scottish poets' published in 1994 and reprinted in  2002, for which he wrote the title poem. His latest book 'A Squatter o Bairnrhymes' from Tippermuir, poems in Scots for all ages, has come out in the last few days and there is a link to buy it below.

Stuart Paterson received an Eric Gregory Award from the Society of Authors in 1992 and a Robert Louis Stevenson Fellowship from the Scottish Book Trust in 2014. He was writer-in-residence for Dumfries & Galloway 1996-98, and was appointed the Scots Language Centre’s Virtual Poet in Residence 2015-2016. In 2017, he was appointed BBC Scotland Poet in Residence.

In the last role Stuart set out to go into battle for the Scots language, See the link below to his video with the BBC 'Here's the Weather' which has had an astonishing 300,000 views. He's still on the warpath and his, and others' work, has done a huge amount to establish the language and put forward through the 'Oor Vyce' campaign an unassailable argument for its official and legal recognition as one of the three languages of Scotland.


Stuart values the accessibility of poetry and its role in telling the story of the land and its people in an understandable and unrarified way, whether in Scots, English or any other tongue. His work in South
Africa a few years back, forging links with iXhosa poets, shows he sees this as a campaign that goes beyond national boundaries. He continues to be a force of nature, a good friend and an important poet. Lang may he haud forrit.

Here he reads 'Bits and Pieces':

A link to buy 'A Squatter o Bairnrhymes':

An Interview with 'Poets' Republic':

Why try to remember that the cafè’s
only open til September or that
January brings floods that fill the pub,
when bar stools bob around inside
like beach debris, slow golems of Urr mud
inching closer with each sludge of tide?

Hestan’s igneous neb pokes into photos
snapped on soundtracks gushing sun,
children’s laughter, wee dogs yapping
challenges to the world & all the while
David Brown will always falter on
its beach, elude those reaching frantic
hands, be swept away to quietly drown.

There are no holiday snaps of Ian Carruthers
hanging high upon the skerries after
travelling down from Annan, no postcards
of that long gone pasture in the bay
where, fifty years ago, the Purdie brothers
paddled into shallow eternity.

Summer lasts a day, a week, the length
of handpicked memory on film or disk,
departs the moment you do, never follows,
stays forever here. Reminding myself
this isn’t really January, I spool
my eyes back half a year to when
they weren’t watering for them.