Poems from the Backroom 113: Jean O'Brien 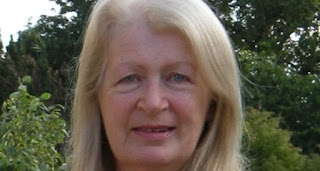 Great to have Jean O’Brien in the Backroom today, a tremendously accomplished Irish poet. Good that she’s talking in one of her poems about fish too. I’ve been working on and off on poem sequence about The Salmon of Wisdom an old Irish tale in which a poet spends 7 years searching for a fish that contains the wisdom of the world, finally catches it and then unaccountably leaves it in the charge of someone else who eats it, thus acquiring all the knowledge of the world.

This seemed pretty typical poet behaviour to me -I wonder why the poet was sidetracked? Urgent need to submit a funding application? tweeting #salmonofwisdom OMG you’ll never guess what? More likely a bottle of something was getting opened, thus also confirming the eternal link between fish, poets and alcohol. I note Jean’s selected Poems is called ‘Fish on a Bicycle’ a reference to that famous feminist trope which also featured in a rather confused but highly successful Guinness advert of the late 1990s featuring some women miners, an empty maternity ward and of course a fish on a bicycle. Basically the message was - and remains I believe in perpetuity- whatever gender you are, drinking like a fish is a good thing.

Jean O’Brien has five collections of poetry, her latest being her 'New & Selected, Fish on a Bicycle' from Salmon Poetry in 2016,  reprinted in 2018 and is working on her next one. She is a prize winning poet having won, amongst others The 'Arvon International' and the 'Fish International'. Her work appears regularly in magazines, journals and anthologies. She is currently taking part in the former Poet Laureate, Carol Ann Duffy’s on-line Covid Diary in conjunction with Manchester Univ called 'Write Where We Are Now'. Her poem 'Child' about the scandal of the Irish Mother and Baby homes was chosen by Poetry Ireland as one of their Poems on the Dart (Rail Transport) in 2019. She holds an M.Phil in creative writing/poetry from Trinity College Dublin and tutors in same. Her work has a deceptive simplicity but there's a nest of ironies, echoes and resonances just under the surface.

Here she is reading 'Breaking the Rainbow' and 'Transit':

An Interview in 'Island's Edge':

An Interview in 'The Wombwell Rainbow':

The small flare of the firefly dancing and weaving
and you walking those shiny linoleum corridors.
Rags of hands twisting together, your throat raw
from the purple and pink, the yellow and blue tablets
that the white coated doctors carefully measure out.
Father reassuring with a lie that you would be home soon.

The chemical smell of you, that later would
smell like the lab at school when we fooled
around with compounds and flicked our fingers
in and out of the blue flame of the Bursen Burner
to feel the heat, feel how it might have felt
when they anointed and annealed you.

Weeks or months later the tin men send you home
to mother us, quiet and meek with only a haze of stars
in your grey eyes and the slight shake
of your hands giving it away. Charged you tried
and tried to earth yourself and play Good Wife,
Good Mother and failing on all fronts you collected
the rainbow of tablets from their bottles and jars
and like Antigone choose your own moment.

Somewhere along the line on the chunnel train
from Paris to London the windows turn to mirror,
a sign that we have entered the tunnel.
We lean into vaulted walls as we stream by
unaware of weather, day or night, anything really,
except this silver lit tube
barrelling us across unseen borders.

I saw pictures of the huge machine boring its way,
with no room for error through the fragile
chalk and clay of Kent and under the seabed.
Another of men either side of the brink
shaking hands after drilling through the thin membrane
to one-another, in underwater détente.

Best not to think of the thousands of tons
of surging seawater bearing down on us,
in this black hole where no stars shine
and pulsars are light years away.
We ache with the weight of remembered water
and navigate on pre-ordained lines
as the silver thread we travel in unspools
always on the straight and narrow.
Better to sip coffee and watch our endlessly
reflected faces recede in nautical miles of mirror.

Imagine instead gills pulsing though our dimpled skin
as if breathing in the waters of the womb.
We are as migrating fish seeking home to the tune
of the catechism of announcements coming and going
in the digitised voice, fizzing with static
that could be Hal's electronic sister
both anchoring and urging us on our Odyssey
while cautioning. Mind The Gap.

in a bed on the other side of the world to a waterfall
of light. As sleep cleared from my eyes I recognised
a sheer wall of net curtains transformed
by sunlight, knew then I was in a larger space
than ever before; as if some sextant in my head
had shot the sun, worked out the angle and height of light,
moon and stars, divined that I was far from home.
I tumbled from bed, steadied myself, stood upright
in this new upended world. I checked to see if the water
in the basin curled Coriolis clockwise, a myth of water.
Water memory can hold for hours and then swirl away
withershins as you try to determine drain spin
and trace earth’s rotation and wonder if you had
ingested Devil’s Berries or Psilocybin.
How we cling to what we know and resist boldly going.
The novelty of umber earth burnished in light and tar roads
that stretch out and out waiting for us to write our story.
Blacktops open to the wide sky, low scrub and miles of bush
beyond the firebreak offer some perspective. At home dirt roads
wend their way up hill and down hemmed in by low stone walls
or cliffs or sight of sea and the lariat line of guide-rope horizon.
This is a place where a thought might grow though racked
by drought with the northern hemisphere reduced to a mere echo.