Poems from the Backroom 109: Renita Boyle 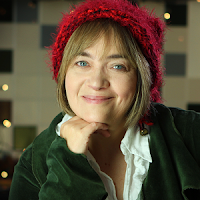 Well the Craigdarroch is preparing its beer garden and Scotland is opening up in mid-month so it feels like this strange hiatus is slowly shifting, in actual physical terms and in the mind. The #plagueopoems is going to go on for a wee while longer, till an important anniversary is reached, but it too is beginning to pull up the blinds. We have a great finale in store and several important journeys still to make, however. I hope folk have been impressed by the Dumfries and Galloway contingent- it is my belief that we’re more of a literary powerhouse now down here than we ever were.

On that subject, a word here for a wee writers group that radiates round the anarchic presence of the splendidly cantankerous Gaelic bard Andrew Wilson and his shop Beltie Books in Wigtown. Though it’s three days travel from where I live, I like to call this group a home from home and the quality of its writers has consistently surprised. It’s a haven of warmth, craft and gossip even in the virtual world.

One of its members for a while was a Wigtown Book Festival regular who I would never have seen previously without a chicken costume or a cowboy hat. Renita Boyle has been dressing up and telling stories to weans in Wigtown for a long time and that is just fantastic but we got an insight into a more serious minded poet when she was with us. Of course it’s a theme isn’t it, specially among those decadent French poets, the poet and the clown, the laughing face and the face concealed.

Renita Boyle is storytelling ambassador for Wigtown Festival Company, patron of reading for Saint James Primary in Renfrew and has been Scottish Book Trust reader in residence for DG Libraries.
She has been DG Life Performing Artist of the Year finalist, storyteller in residence with ShetlandArts and winner of Wigtown Poetry Competition Scots category with the very moving winning poem 'Sloe Jen' which is reprinted at the foot of the page. Renita is from Clear Lake, Wisconsin and here invokes her grandmother and grandfather having Coffee in the Cabin:

Coffee in the Cabin