Poems from the Backroom: Yuyutsu Sharma 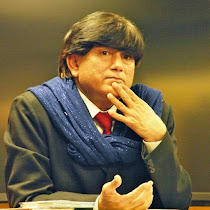 Some good news about the #plague is that it is now going to be the focus of a weekly feature from Renfrew Libraries, dedicated to increasing interest in Scotland's poets and poetry, and I am hoping to perhaps spread this through other libraries too. The full catalogue of poets is available on the previous blog post and all poets- plus some bonus ones!- are available on #plagueopoems on YouTube.

As I said previously, some poems are still coming in from parts of the world and the parts don't come much higher than this! Yuyutsu Sharma is the Laureate of the Himalayas, a world renowned poet and translator. Kabir Das  the 15th Century Indian poet, mystic and saint, said an aspiring poet should first set fire to his house and since leaving his university job in Kathmandu twenty years ago, Yuyutsu has spent much of his life travelling and to many people in many countries, he is the literary face of Nepal and the Himalayas.

He is a recipient of fellowships from The Rockefeller Foundation, Ireland Literature Exchange, The Trubar Foundation, Slovenia, The Institute for the Translation of Hebrew Literature and The Foundation for the Production and Translation of Dutch Literature. His work has been translated into German, French, Italian, Slovenian, Hebrew, Spanish and Dutch. He was at the Poetry Parnassus Festival organised to celebrate London Olympics 2012 where he represented Nepal and India. He travels widely, reading and holding workshops. Currently, he is visiting poet at Columbia University.

Here he reads 'The Migrant Metaphor':

A Selection of Poems:


From my rooftop
I fear for their lives

as if turned into
a lump of sullen meat

crushed under
some gorilla tyres

of a wayward truck
or a supply vehicle.

on the asphalt
of freshly pitched roads

for smooth
stately visits of dignitaries.

Exhausted after
restless sniffing for crumbs

dropped by
some wayward charity,

I see them
slumber into

a resigned voyage
to the netherworld

motionless with
the drooping inertia

not a limb moving
or an alert ear

or some emergency
ambulances hooting though

the fiendish silence
of highways that

stone soup
faith in the humanity

of this century’s
most eloquent


The Flowers in their Baskets


The flowers in their baskets
do not smell of crisp books
or rhymes that sing of flowers of freedom.

sharp and brash
as the stones of bleeding mule paths
tearing a wound with
face of a stifled cry
in murky skies of their fast fading infancy.

(From 'Drunken Boat', Translated from the Nepali)