Hugh Bryden's in the Backroom today, or maybe he's not. Or maybe he is and he doesn't know it. I don't know: it's hard trying to arrange a secret party for folk in these pestilential times. One thing is for sure, and that is that Hugh Bryden is 70 today.

Hugh Bryden is a dynamo and creative genius whose own art work is exceptional but whose collaborations with a host of poets have received wide recognition and praise, well beyond Dumfries and well beyond Scotland.

Hugh Bryden was born in Dumfries on August 13th 1950. He was educated in Annan Academy and Edinburgh College of Art, where he was contemporary to an outstanding bunch of talents including Gordon Boyd and Billy Bunting. He graduated from Edinburgh in 1972 and moved back to Dumfries to teach the year after, as Staff tutor in Art for Dumfries and Galloway Region. Hugh had a succession of exhibitions and one man shows including ‘Paintings and Prints’ in Gracefield in 1990, ‘Prime Cuts’ in the Robert Burns Centre in 1993 and ‘Old Places, New Directions’ in the Otterburn Gallery in 1994. In 1996 he exhibited and held workshops in the Netherbow Theatre in Edinburgh, under the title ‘Hugh Bryden Print Makar’. 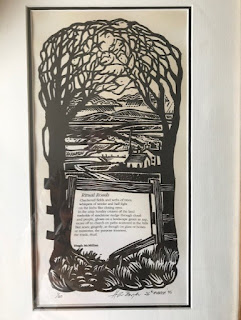 The poster for this exhibition included Bryden’s beautiful setting of my poem 'Ritual Roads, pictured on the right. I therefore claim precedence in his work with poets, Carafuego Press his innovative and beautiful collaboration with Tom Pow, beginning 3 years later in 1999. Hugh gave me a box of beautiful prints of these poems which I unfortunately left in a Dundee telephone box but I still have one, number 1 from 40.
(See 'POSTSCRIPT' at end)

His enthusiasm for Artists’ Book led him to lecture in the subject in Rochester New York in 2002, and in 2005 he founded Roncadora Press to pursue the form with a variety of different poets, including myself, and win several prizes. A short list of recent collaborators would be Hayden Murphy, Tom Pow, Graham Fulton, John Burns, Chrys Salt, Rab Wilson, Jean Atkin, Liz Niven, Andrew Forster, Donald Adamson, Willie Hershaw and Donald S Murray. Here are just a few choice testimonials from some of that motley crew.

What a fine artist you are, and what an honour to have collaborated with you on two limited edition collections – both small works of art in their own right. Both hand stitched, both sensitive responses to my poems, all sold out thanks to the high production values of Roncadora Press
- Chrys Salt

Such a generous man, his attention to detail legendary, his art and sensitivity to the words of others so surefooted.
- Jean Atkin

You’re also left in awe of his artistic skills. He’s incredibly generous with his time and talents and D & G are so lucky to have him in our midst.
- Liz Niven

Bryden is concerned with the artistic merit of a submission. Is it a voice that needs to be heard? Does it have something different and important to say? Does it meet with the publisher’s high artistic standards? These are the things that Hugh thinks about before he considers the writer’s reputation or how many yards of book shelves the work has the potential to shift
- Willie Hershaw

In honour of the man also here is a Tutu from Graham Fulton, a Tanka from Hayden Murphy and a Stonker from Donald S Murray.

You stepped where I - at that time - never stood,
on that station platform
to sketch memorial headstones,
water, moor and wood
and bring my verse to a different form of life.
Hugh, your drawings provide
return tickets to our inspirations,
a new way to arrive,
say, in that destination en route to Kyle
or Inverness. I marvel
at your artistry, the grace and skill
that makes observers stop and wonder,
shake their heads and smile.


As for me, I've always been in awe of his imagination and creative strength but I love his human qualities more. He drinks a bit, he's really generous and he's a good laugh. I suppose t the greatest strain this assemblage of virtues came under was during our great 'Doors' Collaboration in Dumfries. All Hugh's collaborations with poets amount, of course, to him doing all the work while the poets do eff all but actually building, painting and illustrating 8 life sized free standing doors while I sat and drank coffee or beer was, you would think, an imposition too much. It is to his huge credit that he didn't murder me, even though the strain of that entire operation is why he's 70 today rather than his true age, 55.

It should not be forgotten that Hugh is an accomplished poet, featuring in the seminal work of Dumfries and Galloway Scots poetry ‘Chuckies fir the Cairn’ published by Luath in 2009 and edited by Rab Wilson, and publishing his own pamphlet ‘If Ah could Talk tae the Artists’ which in 2008 was shortlisted for the Calum Macdonald Prize.

Hugh’s striking prints and linocuts grace many a wall in D and G and his generous discounting or delayed payments plans have enabled me over the years to make art lovers out of many relatives and friends. It will surprise no-one that Hugh has been spending the period of lock-down due to Coronavirus, on an ambitious project, painting 50 miniature icons and still-lives to exhibit as a celebration of his birthday. Hugh’s hands and brain are never still. He has more ingenuity and vim than anyone I’ve ever known. Let's celebrate a great Scottish Creative! Cheers Hugh!

Here he is reading some of his poems in the series 'If Ah Could Talk tae the Artists' outside the new Bazaar when he was still 69:


From 'If Ah Could Talk Tae the Airtists'

Egon Schiele, Ah get a feel a,
unease in ma hert.
Whin Ah keek at, aa the geeks that,
populate yer art.

Boy, is it no aboot time you wir getting up

Hayden Murphy's lawyers have been in touch to make sure that everyone knows that estimable Irish poet's association with Hugh Bryden, their excellent and long lived Bloomsday collaboration, began in fact in June 1992, yonks before everyone else's. The man is quite right. I have settled out of court.