Poems from the Backroom: Gerry McGrath 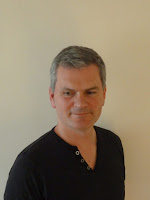 One lesson of the #plagueopoems is that Scotland seems jam packed with poets. There are loud poets and there are douce poets, poets who have a big social media presence and poets who just work at writing poetry.  I think Gerry McGrath is an example of an outstanding poet who just gets on with stuff and leaves the shouting about it to others. There are others, Angus Martin for instance, who let the poems do the talking. Poems often talk quietly, however, it is their persistent power, so Gerry is not as weel kent as he should be, despite his impressive body of work.

Gerry McGrath was born and raised in Helensburgh, Scotland. He attended Strathclyde and Glasgow universities in the 1980s and worked for several years as a teacher before quitting for reasons of ill health in 2000. To date, he has published two full collections of poetry, both by the ever impressive Carcanet, 'A to B' published in 2008 and 'Rooster' four years afterwards, which was shortlisted for the Scottish Book of the Year in 2013. His poems have appeared in numerous publications, including 'Being Alive' from Bloodaxe and 'New Poetries IV' from Carcanet, 2007. His reviews (mainly of contemporary poetry in translation) have appeared in PN Review. He has published several essays on important figures of global modernism, including Szymborska, Brodsky, Montale & Transtromer. He helped edit 'The Novel: a biography' published by Harvard in 2014. In 2004 He was a winner of the Robert Louis Stevenson Memorial award. In 2007 he was awarded a New Writers’ Bursary by the Scottish Arts Council. He continues to write: has completed a third collection, 'Sparkle Horse', and is working on a fourth.

The poem he reads here 'Belvedere', takes a beautiful dreamy oblique view of a life that no-one's ever quite sure is real.  It talks of permanence and transience, our twin controls. Is beauty sustainable? In this poem, at least, it is.

His author page with Carcanet:

So they were sitting beside the belvedere, in shade.
And they were drinking, barely exchanging a word.
The sun was shining and words were beyond them.

Past the low stone wall lay the river. Further off,
lost in the thin blue air, were the island’s three peaks
yet to exist, as if they existed.

A breeze got up; the world tilted and water, seen
slopping up the side of a glass, pushed the air ahead,
carrying birds, the clink of ice, notes of lemon.

On the lawn children ran like small dogs, yelping
with a mix of terror and joy, and occasionally
a mother or father appeared to gather them in.

He thought there must have been days
when people forgot even that they had gone to sleep
and woken, re-born.

That they had flowed, like the river behind
the wall flowed, huge and still and countless,
grey as all rivers are grey.

The sun continued to shine and the breeze blew fresher
and he drank again and thought
in the eyes of small dogs days like this will come again.

say to you that as long as art
teaches language of recovery
eternal reminders of morning
will grow on our sweat, spume,
tick softly on our lips, on our lips.