Poems from the Backroom 37: Gerda Stevenson 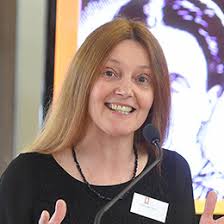 Delighted to welcome Gerda Stevenson into the backroom today. You may remember her as William Wallace's ma, but Gerda is multi-talented, an actress, actor, director and songwriter as well as a poet. Leaving the poetry aside- for now- she has been nominated for and awarded prizes in drama and music, winning a BAFTA award for best actress for Margaret Tait’s feature film, 'Blue Black Permanent' and she was nominated in 2014 for the MG ALBA Trad Music Awards, in the Scots Singer of the Year category. In the same year, she was nominated as one the Saltire Society’s Outstanding Women in Scotland. She has written, in 2017, a libretto based on Coleridge's Rhyme of the Ancient Mariner. In 2018 and 19 she delivered The Thomas Muir Memorial Lecture and the George MacKay Brown Memorial Lecture.

Her first poetry book was 'If this were Real' published by Smokestack Books in 2013, which was published in Italy in 2017 as 'Se Questo Fosse Verture' and in 2018 Luath (quick and rousing hurrah for Luath) brought out 'Quines' a series of poems inspired by and dedicated to the women of Scotland which has deservedly received rave reviews.

and her SPL Profile and more poems here:


Here is the Text of Gerda's moving video poem

How To Tell Him

(On receiving news of my mother-in-law's death)


I replace the phone on its cradle,
the news resting in my ear.
How to bring it to my mouth,
be midwife to words that will cut
the cord of their braided years.
How to tell him?

He looks up from his paper
like a child over a garden hedge -
her fond and only prodigal.
I can hear the clock on her mantelpiece
two hundred miles away, its tick
a pulse to the music of her days:
the hens' muffled clucking at her kitchen door,
the hot water tank's bubble and slurp
as the peat-blaze sears the back boiler;
the ferry's boom at the pier head,
the wind's whine up the croft brae.

She's still alive until I tell him,
sending eggs next week, as usual,
swaddling each fragile oval
in the Press & Journal's folds;
tomorrow's pot roast is on the stove,
homage to the Sabbath, when
duty-bound, she'll take her ease;
and she's skinning Golden Wonders,
scooping salt herring from a plastic pail,
their scaled bellies a rainbow in her palm -
until I tell him.

From 'If This were Real' (Smokestack Books).