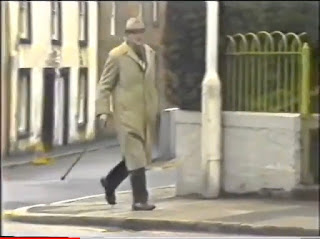 Striding up Laurieknowe in Dumfries here in 1984 is poet, Kirkpatrick Dobie.  From his birth to his death at the age of 91 he stayed, worked and wrote in the town of Dumfries. Born in 1908 his life spanned a century in that ‘provincial town’ where as he said ‘no one, it seems, stands out’. A committed though not unquestioning Christian and a member of the small town bourgeoisie- he inherited and ran a seed merchant business- his poetry can be seen at times as a bit starchy but obsessed as he was with the vagaries and contradictions of the human condition he is never anything less than interesting and is always perceptive. He is an example of how the universal can be found in the local, even the parochial. And he displays both intuition and careful craft.

Usually self published locally - often in that excellent print shop on the High St of Dumfries,  Dinwiddies - he found late acknowledgment in a Collected Poems by Peterloo in 1992, 'Poems from a Provincial Town', and an appreciation in the first ever edition of Gerry Cambridge’s excellent magazine 'Dark Horse'. His poems also appeared in ‘The Independent’ and were anthologised in the Forward Book of Poetry in 1993. However, unlike others, he neither sought nor coveted fame or appreciation. He was his own person, dignified, a trifle stolid, a small-town philosopher and intellectual in the age when small towns could be hotbeds of integrity, even genius, as well as microcosms of every other human vice and virtue.

Here he is recalling his father. In the background you can also hear another muse, his dog.
My Father


My father was a man for stopping horses.
To screams and yells
preceded by a rattling rising roar
the beast appeared,
head reared,
eye rolling black-blobbed swum in white,
battering the cobbles with a bounding cart;
frenzied to freeze the heart.

But at the sight my father's spirit rose
and as the echoes rang
he ran and sprang
high at the rampant head
and bore it down; with all of fourteen stone
muscle and bone
hung! and hung on!

I've never visited his grave.
I could not stand and moralise
or seem to take his size.
What I remember doesn't lie
in any cemetery.
I have his stick
rough-handled, thick,
and now in my own wintry weather,
stumble or slip,
I feel his grip.

Mrs Betty McGeorge
Betty, brought home from nursing home to die-
an old woman- still would cry
for home.
"It isn't home" she'd say,
her fingers plucking at the overlay.
"Sure! Sure it is! There is the tree
you planted. You can see
the top, and just beyond it's the first tee
at Nunfield.
Listen, and you can hear them at their game."
And she would look and listen,
keenly, but always came
that odd disturbing disavowal;
"It's like it, but it's not the same."
(From Dark Horse, Summer 2000)
This film, and the longer section below, exist as a result of a brilliant project initiated by teachers Pat Kirkby and Gregor Ross in 1984 to record the existing poetical talent in the area.

The longer film on Crump here:
Posted by Shug at 02:37