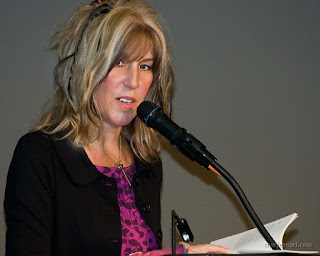 Jeanette Lynes is deprecating about her work- as you can hear in the video- but she is a superb writer, edgy, opinionated and witty I was about to say, but her humour goes beyond cleverness to be a weapon to leaven, dilute or reangle our examination of some serious issues. It's a path I have always been drawn to myself: I think anything that makes poetry less boring, more affecting and more accessible in the process of delivering a message is ok by me. The poem she reads here, 'John Clare in Love' is a case in point. It's hilarious. But serious.

Jeanette Lynes is the author of seven books of poetry and two novels. Her third novel is forthcoming from HarperCollins Canada in 2021. Jeanette was recently a Visiting Fellow at the University of Edinburgh’s Institute for Advanced Studies in the Humanities. She directs the Master of Fine Arts in Writing at the University of Saskatchewan, Canada. She has won many accolades and awards. For instance her most recent novel, 'The Small Things That End The World', won the Muslims for Peace and Justice Fiction Award at the 2019 Saskatchewan Book Awards. Her most recent book of poetry, 'Bedlam Cowslip: The John Clare Poems', from which the featured poem here is taken, won the 2015 Saskatchewan Arts Board Poetry Award.


He first saw her from afar –
tramping across the field, a kind of moving statue,
a girl heavy in good places.

He scrambled up a pollarded tree to mark her shape
and direction. He’d fallen from trees before. This time
despite the ale, he hung on.

Even from a distance he knew she’d look
fine milking cows. Her sturdy form, those hands
would draw the milk, would work the teats.

High in the tree, he was more besotted than a bird,
and happier. His eyes followed her vanishing
over the grassed horizon. He climbed to earth,

penned two poems to her beauty. Anyone in love
will recognize this, the heart’s highest moment, this ledge
of clock before the beloved’s mouth

opens and awry things go and go until the end of time.
But there’d be buckets to fill with wildflowers,
the greensward to harvest, before that befell them,

her name to discover. Could she love a lime-burner?
Like any decent girl she’d send him away.
But he’d return. Until then, in his choking

shifts at the kiln she’d cross that pasture in his mind
a thousand times and what he began to think was,
she walked like someone who could read.
What Editors Don’t Want

She gazed out the window. She was an astute gazer.
She smiled with dazzling teeth into the day’s
drizzle which stirred within her a vague
premonition some dire event would soon befall them.
‘Foreshadowing’, she thought, suddenly. She smiled,
pleased with her own window-gazing acuity.
She stared more probingly into the yard
cluttered with rusted racing cars.
Rickenstock had not cut the grass all summer,
obvious from the tall insolence of the weeds.
Metaphor! She laughed. Metaphors made her laugh.
(Tall insolence of the weeds, not bad,
she thought). She was a quirky, intelligent woman
with a enduring reverence for tropes.
The yard was rampant with neglect & falling action.
She raised her arm & flicked her blonde bangs. She smiled.
She lit a slender menthol cigarette. Suddenly she knew –
Rickenstock! Rickenstock was the killer!
‘Climax’, she thought! Denouement. She smiled.
Jeanette's Website Here, with examples of poems, reviews etc:
https://jeanettelynes.wordpress.com/
More biographical information, poetry, videos and reference:
http://www.stu-acpa.com/jeanette-lynes.html
Posted by Shug at 08:55