Poems from the Backroom 73: Kimberly Blaeser 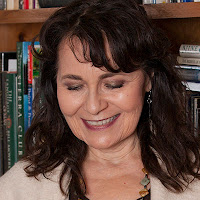 Persistent rumours in the McMillan family over the years of some Native American ancestry seem to have been confirmed by DNA testing, but details are frustratingly patchy. It's certainly possible that the Gaels on one side of the family were in Canada or the USA in some part of the 18th or early 19th Century, as many Gaels were. There are many historical and cultural links between the highland scot and the native american. Many books and articles have been written of this. In some cases emigrants married into native families. There are the very famous examples of these such as Alexander MacGillivray and John Ross, the latter campaigning vigorously but vainly for his mother's people the Cherokee who were forced to travel westwards on 'The Trail of Tears', mirroring the experience of many Highlanders who, at the same time, were being evicted from their homeland. Dispossession is a thing that is held in common, but there are others. A vibrant oral tradition of recording history and culture, as well as a regard for the environment and the land, a thing so important it cannot really be owned.

Kimberly Blaeser is of Anishinaabe ancestry and an enrolled member of the Minnesota Chippewa Tribe. She  grew up on the White Earth Reservation. She is a photographer too, and much of her work involves displaying or revisioning the miraculous routines of the natural world as a way of framing ourselves in it. Hers is an educational and enlightening poetry but also a poetry of rapture. Do as I've done, and buy some of it! There are two links below to buy her two latest books. Four examples of poems are below, in addition to the video poem, and there are links to many others.

Kimberly served as Wisconsin Poet Laureate for 2015-16. She is the author of four poetry collections—most recently 'Copper Yearning'- published last October-and 'Apprenticed to Justice'. She was the editor of 'Traces in Blood, Bone, and Stone: Contemporary Ojibwe Poetry'. She is a Professor at UW—Milwaukee and MFA faculty member for the Institute of American Indian Arts in Santa Fe. She lives in Lyons Township, Wisconsin and frequently also in a water-access cabin near the Boundary Waters Canoe Area Wilderness  "chasing poems, photos, and river otters—sometimes all at once."

Here she reads from 'Copper Yearning'. A quite beautiful poem called Minobimaadizi

Her Previous Book 'Apprenticed to Justice' is available from Salt Publishing Here:

Newly twelve with size seven feet
dangling beside mine off the rock
ledge, legerdemain of self knowledge.
How do I say anything—magic
words you might need to hear?
With flute-playing, green-painted nails
your child’s fingers reach to span the
range
of carmel-colored women in our past.
Innocently you hold those ghost hands:
each story a truce we’ve made with loss.
How can I tell you there were others?

Big-boned women who might try
to push out hips in your runner’s body.
Women who will betray you for men,
a bottle, or because they love you
love you, don’t want to see you
disappointed
in life, so will hold you, hold you hostage
with words, words tangled around
courage
duty or money. When should I show you
my own flesh cut and scarred on the
barbs
of belonging and love’s oldest language?

No, let us dangle here yet, dawdle
for an amber moment while notes
shimmer
sweetly captured in turquoise flute
songs—
the score of a past we mark together.
No words whispered yet beyond these
painted
untainted rock images of ancients: sun,
bird, hunter.
Spirit lines that copper us to an infinity.
Endurance. Your dangling. Mine.
Before the floor of our becoming.
Perhaps even poets must learn silence,
that innocence, that space before
speaking.

Muskrat—Wazhashk,
small whiskered swimmer,
you, a fluid arrow crossing waterways
with the simple determination
of one who has dived
purple deep into mythic quest.

Belittled or despised
as water rat on land;
hero of our Anishinaabeg people
in animal tales, creation stories
whose tellers open slowly,
magically like within a dream,
your tiny clenched fist
so all water tribes might believe.

See the small grains of sand—
Ah, only those poor few—
but they become our turtle island
this good and well-dreamed land
where we stand in this moment
on the edge of so many bodies of water
and watch Wazhashk, our brother,
slip through pools and streams and lakes
this marshland earth hallowed by
the memory
the telling
the hope
the dive
of sleek-whiskered-swimmers
who mark a dark path.

And sometimes in our water dreams
we pitiful land-dwellers
in longing
recall, and singing
make spirits ready
to follow:
bakobii.*

*Go down into the water.

It’s all angle after all.
What we see
and miss.
The leaf bird
limed and shadowed
to match
every other
green upturned hand
blooming on the August tree.
Indecipherable
even when wings flutter
like leaves in breeze.
Or the silhouette
dark and curved
on the bare oak.
Beak,
parted tail,
each mistakable
for knot
branch
or twig.
Only if they exit the scene
unblend
isolate themselves
against too blue sky
does the game
of hidden pictures
end.
Ah, angles.
Tell all
or tell it slant.
What we
dream
appear
or inverted
seem to be.

Of Eons and Epics

We wake with arrowheads—
our hands clamped around dreams,
dreams of hummocky bodies
glacial names tattooed
on each blue-rivered forearm.
What does it mean to hunger
for shards,
a glossary to story us?

I tell it this way:
the sculpting,
the whittle-form of earth—
say kettle with a hard k.
Something is always taken,
something left behind;
it becomes you—literally.
You tombolo, you esker.
We are all debris—
our story a remnant
of what moved across us.
What bounteousness!
We are glacial terrain,
marked pathways—myth.

What does it mean for my fingers, eyes, tongue?
to brim with a telling,
the silk-voiced dream
of one body moving against another?

Sometimes the story is simple:
the etched back of Turtle that holds us—
it asks only belief.
Earthdivers one and all—sleek
water bodies surfacing,
emerge to sing on holy ground.

But the way they tell it
we are land animals,
humanity a paradise of aloneness:
a solved mystery, a locked garden
a departure—
that story the walking away.
The way they tell it
the flood always recedes
from impossible watery origins.

But who fixes the science of meaning?
The truth is:
awake and asleep we betray our small selves
wander beyond borders—
is water bird a metaphor?

I tell it this way:
The diving for survival
(mahng, amik, nigig
together with mink and Nanaboozho).
Their feathered and furred bodies.
Ours. Gathering tiny grains of copper—
sand and sky’s minstrel breath;
Noodin whirling from four directions,
until this:
small magic we call earth.

But feel the fire and flexing beneath us—
the rumble-voiced pulse of this planet,
the vibration of our tectonic bodies?
Remember, we too are still motion—
burning wet and storied,
mythic like Turtle Island.

Imagine with me metamorphic becoming,
each miraculous emergence:
tetrapod limbs
from gelatinous tadpole bodies,
oceans and islands
rising receding rising
in their dance with volcanic force.
Our lives, too, servant to the alchemy
to the carving gusts of wind and water,
time—and telling.

Sing me again the saga of sin
and separation,
of humans and hierarchies;
I’ll sing you
the ballad of glacial bodies
of many creatures made of water and belief—
the one about transformations
about eons and epics—
these sacred cycles and everyday survivals.

The truth is:
we amphibious, we minstrel-born
wear the spiraling path of legends
on each whorled fingertip.
Like the trace of time on the clay of earth—
the drumlin swarms, the conical hills;
we too rise new each day from sleep
to storied lives—to archetypes and anthems,
to the spectacular castings of destiny.
Recite with me each rhapsody history or rumor—
our ancient epic inked now
pigment on rock-face, carbon on parchment,
memory on skin.

(From The Kenyon Review)